Honorary degrees for Kevin Spacey and the Bishop 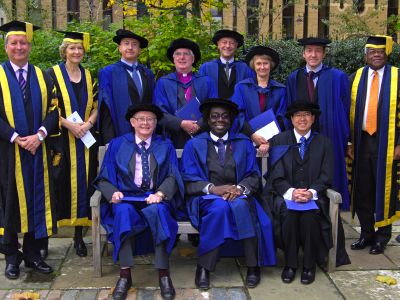 The graduands outside the Cathedral. (Photo: Andrew Houston)

This year London South Bank University awarded four honorary degrees and four honorary fellowships to individuals who have a special affinity with the work and values of the university.

The Rt Revd Dr Thomas Butler, Bishop of Southwark, was made an honorary doctor of literature. He is the Vice Chair (Public Affairs) of the Anglican Church's mission and public affairs council. He is renowned for his ecumenical and tolerant approach to issues of religion and morality, his defence of religious freedoms and his practical engagement with issues of diversity.

Kevin Spacey was made honorary doctor of Letters. Spacey, who lives in the Waterloo area, is famed for his extensive stage and screen achievements and has made a long-term commitment to restore the fortunes and ensure the future prosperity of the Old Vic. Through the theatre's educational and cultural outeach work, he is extending the opportunity for the local community to engage with the theatre, often for the first time. 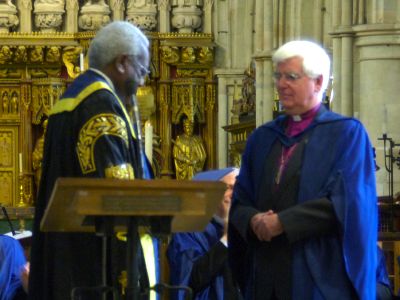 Peter Kyle – chief executive of the International Shakespeare Globe Centre and the Shakespeare Globe Trust – was made an honorary fellow. He is recognised for his dedicated commitment to educational outreach work and fundraising for the arts.

Sir Peter Mansfield has been made an honorary doctor of science. An eminent research scientist who studied at the Borough Polytechnic (the predecessor of LSBU). He was jointly awarded the Nobel Prize for Physiology or Medicine for providing a breakthrough in medical diagnostics leading to the development of magnetic resonance imaging (MRI).

Anne Owers was made an honorary fellow. She is HM Chief Inspector of Prisons and veteran Human Rights campaigner. She helped secure the setting up of the Criminal Cases Review Commission (CCRC) which was created to more effectively investigate possible miscarriages of justice. Through her work, she has raised the profile of prison reform and contributed to the protection of the human rights of all detainees in this country.

Lord Adebowale of Thornes, chief executive of Turning Point, was made an honorary fellow. He is an inspiration to our community, demonstrating leadership in campaigning for the homeless, the unemployed, the disadvantaged and those with learning disabilities in London and he has contributed ground-breaking work advising the Government in social affairs.

David Grayson was made an honorary doctor of laws. David is the principal of BLU – the world's first, virtual "corporate university" for small business development professionals. He is a renowned advocate of corporate social responsibility. He is also actively involved in the not-for-profit and voluntary sectors and has chaired the UK's National Disability Council.

Radiographer Tyrone Goh – from Singapore – was made an honorary doctor of science. 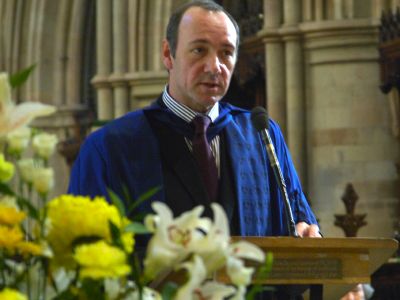 Kevin Spacey responded to the conferring of the awards on behalf of his fellow graduands.

A reception for the graduands and guests followed at the Glaziers Hall opposite the cathedral in Montague Close.