The Better Bankside Travel Planning Group has been launched with an early morning breakfast conference at the Jerwood Space. 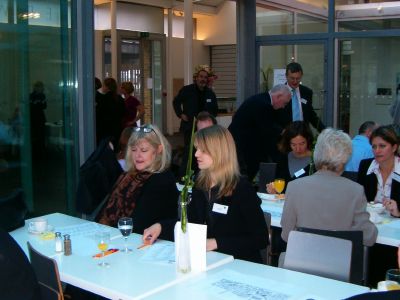 Huge pictures of Bankside were projected on the wall during the breakfast before business representatives were welcomed by Better Bankside chair Donald Hyslop and Southwark executive member for environment and transport Richard Thomas.

Anne Radford, of Bankside Residents Forum and a business owner, stresssed that any improvments at London Bridge Station should not and need not be dependant on Thameslink 2000 final plans.

During the speeches Richard Thomas revealed that he had cycled from Dulwich whilst Paul Evans confessed to having arrived by car.

Also present were representatives of Transport for London including the London River Services division.

The results of group discussions about making journeys to work easier and more environmentally friendly will be revealed in January.

The Better Bankside Travel Planning Group is composed of local employers working together to play an active role in transport dcecisions in the area with the aim of improving theenvironment and incresing travel options for their employees. This is a joint initiative of Southwark Council and Better Bankside (the borough's first Businesss Improvement District).