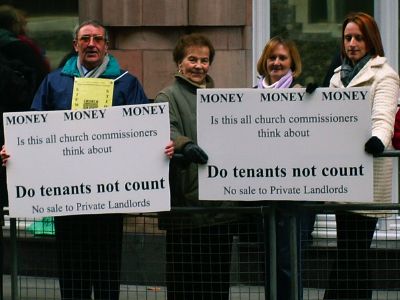 Tenants of the Octavia Hill Estate (which comprises housing in Waterloo, Walworth and Vauxhall) are resisting plans by the Church Commissioners to sell the properties – including 159 homes in Waterloo. If a sale is inevitable, campaigners insist it should be to a social landlord.

Tenants handed out leaflets to members of General Synod as they arrived at Church House in Westminster. Vauxhall MP Kate Hoey and vicar of St John's Waterloo Canon Richard Truss are among those who joined the demonstration on Wednesday.

The Southwark and Lambeth tenants are backed by many local priests and churchgoers. Indeed, the Southwark Diocesan Synod voted, at its meeting on Saturday, to challenge the Church Commissioners to maintain some social housing on the estates which it is expected to sell. In an emergency debate the Synod passed, by an overwhelming majority, the motion put by Ven. Michael Ipgrave, the Archdeacon of Southwark, on behalf of himself and Ven Christopher Skilton, the Archdeacon of Lambeth, in whose archdeaconries these properties lie. The motion urged the Church Commissioners, in their disposal of the housing stock, to ensure that a significant proportion of social housing was maintained.

The General Synod members from Southwark Diocese had all been sent a report on the events surrounding the expected sale of two estates owned by the Church Commissioners in South London and the emergency debate happened as a result of this. The report concluded:

"The clergy involved in discussions with all interested parties firmly believe that it is imperative to seek to maintain these estates as part of the social housing stock of South London. A disposal with no attempt to maintain the stock as social housing would be damaging to the local mission and ministry of the church. And that is what these estates are: social housing stock, and that is how they should be valued if, as seems probable, the Commissioners are determined on a sale. It is appreciated that the Commissioners have a legal fiduciary duty not to sell at an undervalue but a feasibility study to see how such a sale might be achieved ought to be carried out as a first step."

In response to the Southwark Diocesan Synod motion, Paul Clark, chief surveyor for the Church Commissioners, said: "We understand the interest of the diocesan synod, and would have appreciated the opportunity to discuss the issue with its members ahead of this motion. We have kept tenants and the local clergy informed throughout.

"As the diocesan motion itself appreciates, the Church Commissioners have a fiduciary duty to obtain the best terms for the sale of these properties to support our contribution to the wider church. To seek to put the restrictions suggested on the sale would only decrease the price.

"Whilst it will be for new owners to determine their own policies, we have stressed to tenants that the sale is of the freeholds of the properties only. Existing tenancy agreements will remain in place.

"It is too early to say who will buy the properties, but we believe that the sale will be a good outcome for tenants, as the new owners are more likely to be in a position to invest in the properties for the long term."

Throughout much of the twentieth century these estates continued to be let to tenants at affordable rents, even when rent control was relaxed and open market rents substantially increased. Across London there were, in 2001, 1,590 homes. They have thus formed part of the social housing stock of South London for about 100 years.

Earlier this year 130 homes in Waterloo were sold by the Commissioners.

Last month Kate Hoey tabled a written question in the Commons asking second church estates commissioner Sir Stuart Bell what assurances have been given to the tenants of properties sold by the Church Commissioners in Vauxhall constituency in the last two years regarding the level of their rent. Sir Stuart replied: "The sale was of the freehold only; existing tenancy arrangements were not changed. Future tenancy arrangements will be for the new owners, a 50/50 partnership between a social housing provider and a private landlord."

It is that partnership between a social landlord and the private sector that alarms tenants; they fear that when tenants die or move away, the properties will be sold on at market rate, thus depleting the social housing stock.