From Borsetshire to Bernie Spain Gardens 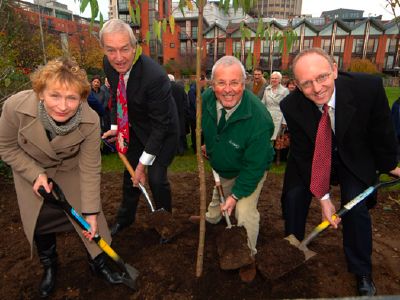 This is just one of the many thousands of trees that will go into the ground throughout the country during National Tree Week, which marks the beginning of the winter planting season.

Newcomen Street-based environmental charity the Tree Council, a partnership of organisations working together for trees, started this annual festival in 1975 and it quickly became a highlight of the calendar. Over 20 million trees have been planted as a result and many millions of people have been involved.

This National Tree Week, the Tree Council is encouraging everyone to set about adding trees to their neighbourhoods by planting trees in 'their' ground – anywhere they live, work, learn or enjoy themselves, from gardens, parks, urban streets, school grounds and workplaces to rural landscapes. They can either get out with friends, family, colleagues, school or community to plant trees (with any necessary advance permission) in 'their' patch or take part in one of the hundreds of special public events. These are planned throughout the country by Tree Council member organisations, its tree wardens and other supporters, and range from tree planting to walks, talks, songs, story telling, tree dressing and woodcrafts.

Wind can be a bit of a challenge for young trees in the Coin Street gardens – so a eucalyptus was chosen for the launch planting site because it is on the list of 'windfirm' trees in the Tree Council's new illustrated book, Trees in Your Ground.

In the foreword to the book Jon Snow says: "A national drive to plant more trees, encompassing individuals, communities and local authorities, could have a fantastic effect on most neighbourhoods, urban and rural alike. The trouble is that most people have no idea of what they, as individuals, could do to make it happen. I hope that Trees in Your Ground will help provoke that revolution in tree planting.

Terry Molloy's Archers character Mike Tucker is one of the newest recruits to the Tree Council's tree warden scheme. Mike Tucker was recently appointed tree warden by Ambridge Parish Counci to succeed the late George Barford (played by the actor Graham Roberts, who died last year). Tom Forrest (played by the late Bob Arnold) was Ambridge's first tree warden and he attended the launch of the Tree Warden Scheme in 1990.