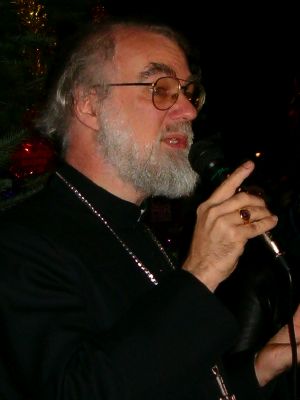 The Archbishop, referring to the recent row about the status of Christmas in Lambeth, said: "Christmas is the Christians' Christmas present to everybody else. Christmas to a Christian tells us why people matter. They matter because God took us seriously enough to get involved in our life to suffer with us and change things. That's what I believe. That's what Christians believe and why Christmas exists."

Earlier he had reminded the crowd about the day also being World AIDS Day and that people with HIV or AIDS matter. He also recalled his recent visit to Pakistan where he met people suffering from the effects of the earthquake who matter.

Dr Williams, speaking as a local resident, added that it mattered how we reacted to people around us who need love, attention and care. 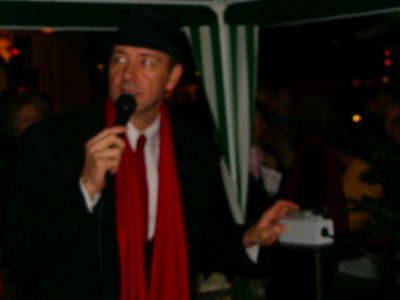 Kevin Spacey said that he was incredibly pleased to be in the square that he was able look out on to every day from the Old Vic opposite (where he is artistic director) and hoped that the theatre was helping to bring people to the nearby businesses.

The Archbishop joined in the countdown before Kevin Spacey pressed the button to light the Waterloo Christmas tree.

During the build-up to the switch-on Morley College's Can't Sing Choir led the crowd in the singing of carols.

The festivities had been going on for several hours across the road at Waterloo Millennium Green where there was a bouncy castle and Father Christmas made a personal appearance.

• The tree has been donated by the Norwegian Embassy and its decorations featuring Waterloo place names designed by the Prophet store in Lower Marsh.
• The Christmas event was a joint venture between Lambeth Council and the Waterloo Quarter Business Alliance, the area's pilot business improvement district (BID).