Last weekend a group of teenagers from Waterloo housing estates starred in a seasonal spectacular to be aired on ITV1 on Christmas morning. 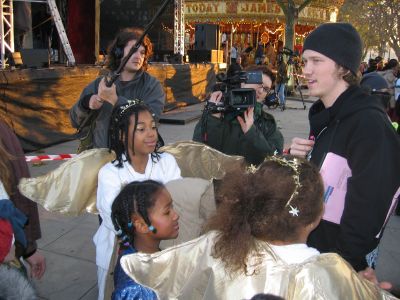 With the help of pop star Daniel Beddingfield and a host of other celebrities, the budding stars from the housing estates performed the nativity play on a special stage on the South Bank riverside walkway near Hungerford Bridge.

The play was organised by Revd Steve Chalke, the minister of Church.co.uk in Kennington Road.

Mr Chalke, a familar figure to TV viewers, was given the challenge of pulling the production together in the space of a few weeks with no money and no professional actors. With the help of others from Church.co.uk (formerly Christ Church and Upton Chapel, opposite Lambeth North station), people of all ages have been recruited from the housing estates near the church to take part in the nativity.

"This nativity captures so much of the true spirit of Christmas," says Steve Chalke. "Viewers who tune into ITV on Christmas Day morning will catch a glimpse, not just of a nativity, but of ordinary people showing the nation that the Christmas story is not just for the religious – it is for everyone." 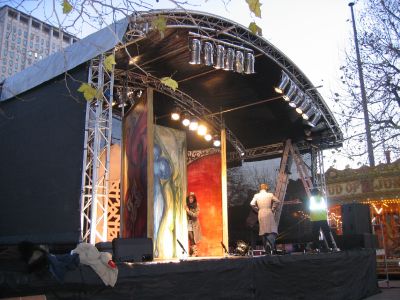 The stage on the riverside walkway

As well as persuading sceptical residents to take part in the production, Chalke managed to enlist the help of local businesses, a nearby arts college and a number of celebrities, including pop star Daniel Bedingfield, former "'m a Celebrity" contestant Sheila Ferguson and ex-GMTV presenter Anthea Turner, who have provided voice coaching, acting lessons and moral support for the budding actors and actresses.

It has already been an experience of a lifetime for the twenty-odd members of the cast, who last week had the opportunity to visit the sets of Coronation Street and Emmerdale, where they were able to pick up acting tips from several of the soap stars.

"I have really enjoyed being a part of this nativity," says 18-year old local resident Ricky Garrett. "Having cameras film me has been a new experience, it has made me feel famous for a few weeks, whereas otherwise life is pretty normal. I think this nativity will help local people realise there are good things – things to be proud of – in our neighbourhood."