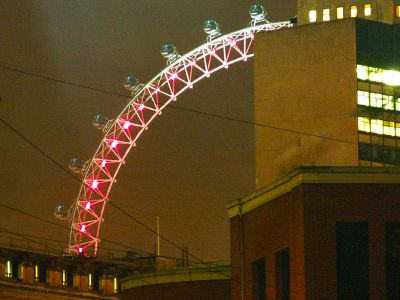 Dave Cook, 36, and James Wright, 30, from Clapham, exchanged vows on the London Eye, which has taken bookings for a further six civil partnerships over the next few months.

Over in Southwark, HMS Belfast was one of the venues hosting its first same-sex partnership ceremony. Southwark Council recently launched a marketing campaign to promote the borough's venues and advise couples planning their ceremonies.

"We are hugely committed to diversity and the LGBT community which is why we are going that bit further to help same sex couples who are planning their civil partnership," says Southwark Council leader Nick Stanton.

"Southwark is lucky to have so many fantastic venues and we're delighted that even more people will now be able to make use of them."

Venues on offer in Southwark include the Golden Hinde, Vinopolis, Oxo Tower Restaurant and The George Inn, Borough High Street.

Same-sex couples have been able to hold ceremonies at City Hall to sign the London Partnerships Register set up by Mayor of London Ken Livingstone since September 2001. Now that civil partnerships are recognised in law, the London register has been closed.

The final registrations took place on 17 December, bringing the total number of couples registered to just under one thousand (995).