Local artist Ian Davenport has been commissioned to create an installation for the railway bridge at the western end of Southwark Street. 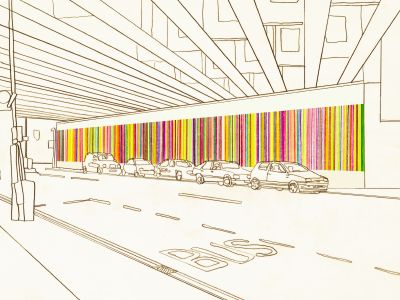 At almost 50 metres long and three metres high, it will be one of the largest permanent pieces of public art in London.

It will replace the existing BANKSIDE lettering by Caruso St John, installed in 1999.

For the commission Ian Davenport will create one of his signature murals. The piece will be created by carefully pouring liquid enamel down flat panels to form vertical lines of over 300 vibrant colours.

The artwork is funded by Land Securities and Southwark Council, with additional support from the Arts Council.

The installation of 'Poured Lines', planned for early autumn, is part of the Southwark Street Gateway Improvement Project to enhance this route into Bankside; 1.2 million people currently pass under the bridge every year. The bridge will benefit from fresh paint, new lighting, bird protection and cleaning. In advance of installation, refurbishment of the bridge structure is already underway.

Cllr Jeff Hook, Southwark Council's executive member for regeneration, said: "We welcome this initiative. This shows the important role that good design plays in the regeneration of an area. The sensitive use of street art has an upbeat effect on an area and helps to reinforce the emergence of Bankside as the leading cultural quarter in London. I look forward to similar proposals for other parts of the borough."