Members of a gang which undertook and filmed a series of brutal assaults and robberies including the killing of David Morley have been sentenced to a total of 44 years imprisonment.

Four people appeared for sentencing at the Central Criminal Court on Monday following their conviction for the manslaughter of David Morley and conspiracy to commit grievous bodily harm on 30 October 2004.

Reece Sargeant, 21, of Sambrook House, Hotspur Street, Kennington, was sentenced to 12 years for the manslaughter and 6 years for the conspiracy to run concurrently.

Darren Case, 18, also of Sambrook House, was sentenced to 12 years for the manslaughter and 6 years for the conspiracy to run concurrently.

David Blenman, 17, of 16 Baltimore House, Hotspur Street, was sentenced to 12 years for the manslaughter and 6 years for the conspiracy to run concurrently.

Chelsea O'Mahoney, 15, from South Norwood, was sentenced to 8 years for the manslaughter and 5 years for the conspiracy to run concurrently.

The judge lifted reporting restrictions on the identification of the juvenile suspects.

The court had heard how the gang conspired to go to the Waterloo area on the evening of 29 October 2004 to commit random acts of violence and robbery.

Together they attacked eight victims in five incidents between 2.30am and 3.20am. Their victims were punched, kicked and stamped upon.

At approx 2.30am David Dobson was assaulted in Lower Marsh after being asked for the time by one of the gang. He was punched to the ground then kicked in the face before the gang moved on.

The next four attacks occurred in the space of ten minutes between 3.10am and 3.20am.

At approx 3.10am David Morley, a 37-year-old bar manager from Chiswick who survived the bombing of the Admiral Duncan in Soho in April 1999, and his friend Alistair Whiteside were sitting on a bench near Hungerford Bridge when the gang attacked them knocking both to the ground and punching and kicking them.

Their pockets were searched and Mr Whiteside's mobile phone was stolen. The assault then continued and the female juvenile then kicked David Morley in the head.

Mr Morley was taken to St Thomas' Hospital by ambulance where he was operated on but died in intensive care at 7.40pm.

A post-mortem found Mr Morley had suffered 44 injuries from the beating including five fractured ribs. He died as a result of a hemorrhage from a ruptured spleen and fractured ribs.

The pathologist report said Mr Morley's injuries would be more commonly seen in people who had been in a road traffic accident or fallen from a great height.

At approx 3.15am, Frank Pitassio, Vincent Biasizzo and Daniel Oliviera who were sitting on a nearby bench were subjected to a similarly violent assault in which Mr Pittasso's mobile phone was stolen. Two witnesses saw the unprovoked attack and called police after the group had run off in the direction of Jubilee Gardens.

Nigel Elliot was sitting alone in Jubilee Gardens close to the London Eye when he was approached by the group and hit over the head with a bottle before being frisked. He managed to escape and ran off but was tripped up and then kicked repeatedly in the face by at least two people. 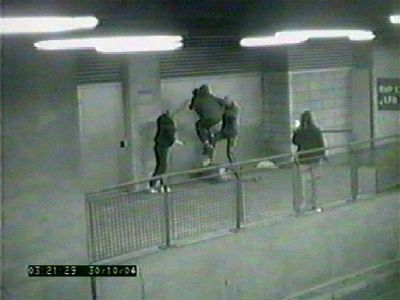 At approx 3.20am Wayne Miller who was sleeping rough in a doorway in Leake Street was awoken by voices and then felt a kick in his back. He was repeatedly kicked in the head before the group ran off "whooping" in celebration.

An extensive investigation by the Specialist Crime Directorate's homicide unit led by DCI Nick Scola uncovered a raft of evidence to support the prosecutions.

CCTV footage showed the gang gathered in Hercules Road, Kennington before proceeding to the Waterloo area. Their route followed the path of the incidents at times consistent with the attack.

The footage showed them walking along Lower Marsh, spread out across the road as described by David Dobson. Part of the attack on him can also be seen.

The whole of the attack on Wayne Miller was captured on CCTV and shown to the court. As a result of the CCTV footage at Leake Street detectives were able to recover fingerprints from the scene which helped identify the gang members.

It also showed O'Mahoney holding a phone up, apparently filming the attack. Police recovered the phone but despite extensive forensic analysis were unable to recover any photos from it.

One 15-year-old witness, an associate of the gang members, was interviewed by police on 9 November and told them she had heard them planning to go out in the early hours to beat up "tramps, druggies or just people on the street" and agreeing how the proceeds of any robberies would be divided up.

They agreed a cue to attack, which would be if one member said "You know what time it is?" They referred to such activities as "all-nighters".

A diary belonging to the female juvenile was found by detectives when they searched her home. It referred to a further attack on a homeless man on 3 October 2004 which was subsequently verified by police.

A beer bottle found at the scene of the attack on Nigel Elliot was found to have blood from Frank Pitassio thereby linking the two incidents.

Fingerprints belonging to Darren Case and Blenman were found on the metal doors at the scene of the attack on Wayne Miller consistent with the contact with the door shown in CCTV footage of the attack.

Frank Pitassio's mobile phone was used to call Reece Sargeant's girlfriend at approx 4.03am on the morning of the attacks. She confirmed that Sargeant had said he was calling on a stolen mobile phone.

O'Mahoney was arrested on 8 November at her home having been seen entering it carrying a blue bag. Without prompting she told officers "That's what I wore on the night". In interview she admitted being present at all the attacks except that on Nigel Elliot, she identified the other gang members but denied any involvement in the violence. She denied filming the assault on Wayne Miller.

DCI Nick Scola said: "When the Admiral Duncan pub in Soho was bombed in 1999 David Morley helped others despite his own injuries.

"He came to symbolise what is good in human nature and how adversity can unite and strengthen communities. For him to lose his life in such a cowardly and pointless attack was a tragedy in every sense of the word.

"The attacks were carried out so they could be filmed on mobile phones and later played for the attackers' pleasure – without thought or regard for the injuries and consequences for their victims.

"We are pleased that the sentencing of the gang to spend significant period in prison will mean that they no longer pose a danger to the public, however our thoughts are with the family and friends of David Morley who will have to live with their loss forever."

Assistant Commissioner Tarique Ghaffur said: "The horrific death of David Morley and the brutality of the attack by these young people shocked us all. Their complete disregard for the life of an innocent man and the manner in which they filmed the attack as a trophy of their actions, is extremely disturbing. My sympathies go out to the family of Mr Morley and thank them for their cooperation and courage throughout this difficult investigation.

"Detective Chief Inspector Scola and his team led an excellent investigation into this brutal killing and I thank them for their hard work.

"I remain deeply disappointed with the resulting conviction for manslaughter and not murder. Although the suspects were prosecuted for murder the jury decided to return a verdict of guilty to manslaughter as they are permitted to do so by law.

"We worked closely with the CPS on this case and I have asked Commander Dave Johnston, the new head of the homicide command, to work with them to see if there are any lessons that can be learnt as to why the conviction was one of manslaughter and not murder. This work is ongoing."