MP Kate Hoey joined a meeting of local residents on Friday night to discuss the fate of the 106-year-old trees on the northern edge of Archbishop's Park. 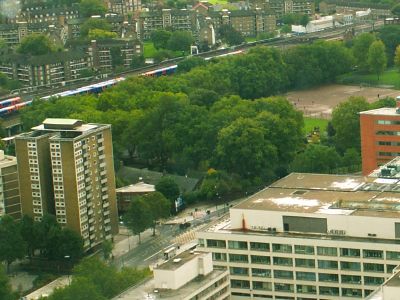 Later this month Lambeth Council's planning committee is due to consider a revised planning application from the Guy's and St Thomas' Charity for its Founder's Place development on land east of St Thomas' Hospital and north of Archbishop's Park.

The development is to include key worker housing and a new Ronald McDonald House for families of patients at the Evelina Children's Hospital. More than 300 private flats will help to fund the scheme.

A previous application was put on hold last November to allow plans to be redrawn to reduce the impact on the line of trees at the northern end of SE1's largest green space.

Friday's public meeting at China Walk Tenants' Hall heard from a representative of the scheme's architects, Terry Farrell and Partners, who explained that the edge of the building facing the park had been moved back three metres, and balconies removed from the south-facing flats. This would be offset by a corresponding height increase in parts of the scheme.

In the original plans seven trees would have had to be pruned by up to 51 per cent. On the latest plans, only five trees will require to be pruned to one side of the tree crown, to a maximum of 23 per cent.

However, residents were concerned to hear that the underground car park below the new building would remain in line with the original plans (ie three metres closer to the park than the above-ground structure). Tree experts have been commissioned by the applicants to establish the location of the trees' roots and how these might be affected by the construction work.

Concern was also expressed that future residents of the south-facing flats might campaign for the trees to be pruned to provide more light to their homes. It was suggested that details of the agreed tree canopy edge could be inserted into leasehold and freehold documents to pre-empt any future complaint.

The meeting was addressed by Green Party London Assembly member Jenny Jones, who congratulated local residents for their vigilance in monitoring planning applications affecting the park. "It's incredibly important that you carry on," she told the meeting, explaining her party's opposition to the "constant erosion of green space" in London.

Ms Jones added: "If there's a peaceful protest in front of a bulldozer, I will be there".

"It is being rushed through without a genuine consultation on the detail and I will be opposing this," Vauxhall MP Kate Hoey told this website. "I would hope that in the meantime Lambeth would withdraw for further consideration, particularly relating to some of the details on the trees, the long-term tenants' housing and the destruction of one of the last remaining Victorian schools in London."

A spokewoman for the Guy's and St Thomas' Charity told the London SE1 website: "...the Charity has taken the matter of the protection of trees in Archbishops Park very seriously and following concerns raised in November 2005 the Charity further consulted with an arboriculturist (tree expert) to ensure that the planned development will not cause damage to the trees nearest the buildings."

The meeting also heard complaints from long-term tenants of the charity's existing housing in Canterbury House, who will be rehoused in new accommodation as part of the scheme. Some tenants felt that with no natural light in their new kitchens and bathrooms they were not getting a "like for like" exchange with their current homes.

The meeting was also attended by Bishop's Ward councillors Peter Truesdale (who is also leader of Lambeth Council) and Charlotte Parry, as well as Patricia Moberly, who was last month reappointed as chair of the Guy's and St Thomas' NHS Foundation Trust.

Although the charity is pressing ahead with its planning application for the site, it is still seeking a commercial development partner to enable the full scheme to be built.

Sources close to the Charity reject claims that the consultation has been insufficiently thorough, pointing to the series of exhibitions and meetings which have been held, as well as discussions with local organisations such as the Waterloo Community Development Group.

• Local residents have until Thursday 9 March to send their comments on the application to Lambeth Council. The address to write to is Lambeth Planning, Phoenix House, 10 Wandsworth Road, SW8 2LL (ref 05/01168/FUL Land North and South of Royal Street)
• Lambeth's planning applications committee will consider the application at a special meeting to be held at 7pm on Thursday 30 March at the Franklin-Wilkins Building in Stamford Street.
• Discussion in the London SE1 Forum, with detailed comment from the Charity