The House by the Thames

A small party at 49 Bankside has marked the launch of Gillian Tindall's book about the 300-year-old bulding. 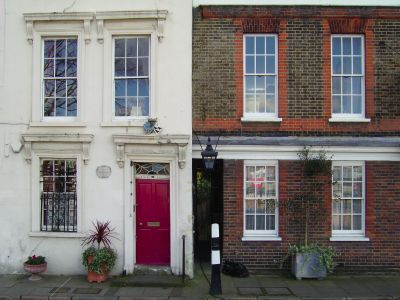 The House by the Thames tells the story of the tall house which has survived huge change and now finds itself alongside a new Globe theatre and the Dean of Southwark's official residence.

This remaining riverside residential row is known as Cardinal's Wharf because number 49, although built about 1710, stands on the foundations of the Cardinal Hat pub dating from Elizabethan times. Indeed the front door still opens directly into the old pub parlour known maybe to Shakespeare but certainly to ferrymen. For the party a fire was lit in the parlour grate.

Running in a tunnel alongside, and on the rising bank of Bankside, is Cardinal Cap Alley which the author dates from 1579. The book not only goes into detail about the much-loved house and who lived there but also looks at Bankside through four centuries.

Gillian Tindall was drawn to Southwark whilst writing The Man Who Drew London, her 2002 book about Wenceslaus Hollar who captured for us the views from Southwark Cathedral's tower in the 17th century.

Among those at her latest book launch was author and journalist Simon Jenkins who described The House by the Thames as "a total delight". Also present was former Sunday Telegraph editor Sir Peregrine Worsthorne who lived there in the 1950s until driven out by rats.

• The House by the Thames and the people who lived there by Gillian Tindall (Chatto & Windus Ł20).
• See page 8 of the March issue of in SE1 for a full review.