Searching for Shakespeare at the National Portrait Gallery

The Searching for Shakespeare exhibition appears to find a trail leading to Southwark rather than Stratford. 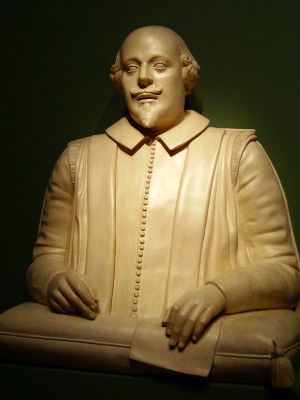 Replica of the bust at Shakespeare's burial place in Stratford

The National Portrait Gallery is celebrating its 150th anniversary by looking at the very first portrait presented to the gallery in 1856. This was the Chandos portrait of William Shakespeare which for this special show has been placed alongside five other contenders for the authentic likeness.

There is much material from Bankside thanks to Patrick Spottiswoode of Shakespeare's Globe and its former Artistic Director Mark Rylance who advised on exhibits.

A drawing by Wenceslaus Hollar made from the tower of Southwark Cathedral shows Bankside soon after Shakespeare's death. The edge of St Mary Overie Dock can be seen below the nearby Winchester Palace which still has a roof on its great hall (now alongside Clink Street) and a kitchen on the west end (covering today's Amano). To the south is an orchard (Borough Market) and the Globe is seen on the very edge of Southwark.

Also depicted is the Hope Theatre in Bear Gardens where there were stables for twelve brown bears and a hundred dogs involved in bear baiting. The exhibition includes a bear's skull found on Bankside as recently as 1989. 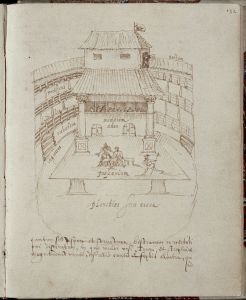 Drawing of the Swan Theatre by Arendt van Buchell after a sketch by Johannes de Witt, after 1596-7 (University Library, Utrecht)

The first Southwark theatre used by Shakespeare was the Swan which stood in Hopton Street where Bankside Lofts now rise. A small drawing of the three thousand seat Swan is the only surviving record of the interior of an Elizabethan theatre.

But the heart of the exhibition is the Chandos portrait. However, The Guardian has called it a fake and the NPG now says admits that a claim about the portrait representing Shakespeare "is not absolutely watertight".

Alongside the rival portraits is a replica of the bust of Shakespeare in Holy Trinity at Stratford where he is buried. This exhibit may provide the real likeness as the head and shoulders were carved not in Stratford but in Southwark by Gerrat Johnson the Younger whose studio was near the Globe. He was probably paid by three Southwark actors who would have required a good likeness. Indeed Johnson had probably known Shakespeare. 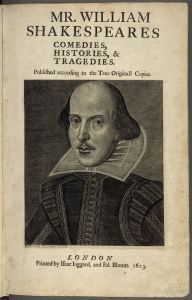 William Shakespeare, First Folio by Martin Droeshout the younger, c.1623 (By permission of The British Library)

The same actors commissioned the First Folio which has an engraved portrait resembling the bust although maybe suggesting a slightly younger, though still balding, Shakespeare.

This exhibition offers a rare chance to check out the claims by simply crossing the Thames rather than travelling to Stratford. It is interesting to find that the show's designer is Charles Marsden-Smedley who was responsible for the Tate exhibition devoted to William Blake.

• The very enjoyable catalogue, Searching for Shakespeare by Tarnya Cooper (Ł35; paperback Ł22.50), has a colour illustration of every exhibit and includes essays looking at Shakespeare's personal life and his image.

Buy tickets for the exhibition with TicketSwitch