Amanda Holden and her nine-week-old baby Lexi came to Oxo Tower Wharf on Wednesday to support Shelter's campaign to end bad housing for the next generation. 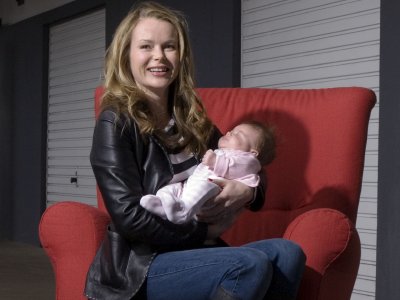 Amanda is the latest celebrity to support the campaign by posing in Shelter's red chair. Her picture join shots of a host of stars including Davina McCall, Jarvis Cocker, Dame Kelly Holmes, Ms Dynamite and Joseph Fiennes who have been snapped sitting on their backsides for Shelter to register their protest at the fact that more than one million children in Britain are suffering in bad housing.

The celebrity images, along with photographs of more than 5,000 members of the public, can be seen at an exhibition at the.[email protected] until Sunday 2 April.

The thousands of people who have sat in Shelter's red chair are part of a national 'sit-in' protest backing Shelter's call for the Government to make a commitment to ending bad housing for the next generation of children.

"These photographs, of thousands of people from all walks of life, are a moving demonstration of the scale of public backing for Shelter's call for an end to bad housing for the next generation of children," says Shelter director Adam Sampson.

"Coming along to the exhibition is your chance to join Amanda and thousands of others by sitting on your backside in Shelter's red chair and showing you won't stand for it either."

Members of the public who come along to gallery will have the chance to become a part of the exhibition too – by having their picture taken in Shelter's red chair to protest at the scandal of bad housing for children.