Celebrating the tenth anniversary of the Our Theatre project, students from 14 Southwark schools gave an ensemble performance of As You Like It on the Globe stage. 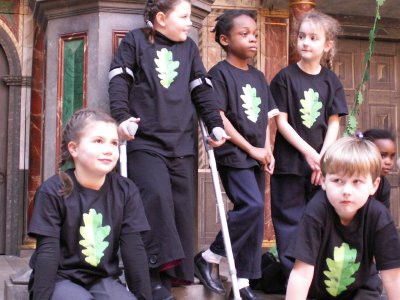 Developed to build confidence and creativity in students around Southwark, Our Theatre is a educational project supported by PriceWaterhouseCoopers and Southwark Council that brings children together with a common goal of staging Shakespeare's works. Every year, 14 Southwark primary and secondary schools work alongside Globe Education practitioners over an 8 week period on an ensemble piece of theatre.

The productions of Our Theatre are unique in the fact that no costumes and few props are used in the creation of their plays. Instead, language and body movement are used to project the story, chatacters and environments. The imagination is key to the success of all Our Theatre productions. And, to help the imagination, music played by students participating in the production can be heard from various places around the stage, which helps to create a world of colour and excitment.

As You Like It was the choice for this years 10th anniversay production. Over 450 students took part in the play wearing shirts of black with a green leaf of Arden on the front, which helped to unite the large group of students in telling the story. Each school was given various scenes within the play to interpret and present as they saw fit. Vast differences in presentation of the play made the story new and interesting at every turn. The students seemed to truly enjoy being on the stage and making the 400 year old work of Shakespeare as relevant today as it was when it was written. The result was an active and entertaining play that was engaging for both participants and onlookers.