Southwark Liberal Democrats this week launched their manifesto for the local elections on 4 May. What does it mean for SE1 residents? 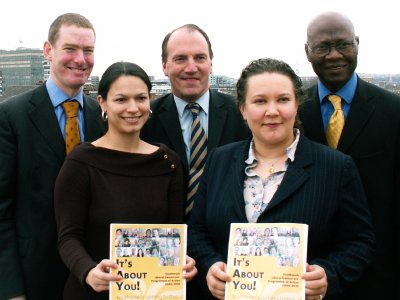 Having run Southwark Council as a minority administration since 2002, the Lib Dems are hoping to take overall control on 4 May.

"It's not often that a politician can say that they have done everything that they promised to do," says council leader and Riverside councillor Nick Stanton. "The Lib Dems are really proud that, even with minority control of the council, we fulfilled the six key promises we made to Southwark residents back in 2002 and much more."

Cllr Stanton was joined by Simon Hughes MP and other Lib Dem colleagues to unveil the party's set of six key pledges to voters for the next four years.

At a briefing for local journalists, Cllr Stanton said that his party was proud of its "local record" and criticised the "intensely negative" Labour campaign, which he branded "a disgrace".

Simon Hughes said that he was "absolutely clear" that the Lib Dems deserved to take full control of the council, pointing out that if the Lib Dems achieve this aim, it will be exactly 25 years since the first ever Liberal councillor was elected to Southwark Council in 1981.

Tall buildings continue to be a big issue in SE1. Was the executive's rejection of proposals to designate Blackfriars Road as a zone suitable for tall buildings a cynical move to park the issue till after the election?

Deputy leader Cllr Cathy Bowman denies this, explaining that there had been an "enormous debate". Whilst the area was clearly under "huge pressure" for higher density development, she said it was important to ask "what are local residents going to get from having a tall building?" and what will it be like to live around skyscrapers.

Simon Hughes added that he thought that councillors had been "clearer and bolder" in making sure that it was "elected councillors' policy, not officers' policy" which was reflected in planning decisions.

Services and amenities for a growing population

With a growing residential population in the area, users of this site often ask what is being done to ensure that public services and utilities keep pace with the residential development.

Cllr Stanton said that the provision of recreation facilities such as adventure playgrounds, football pitches and other communal spaces was "an incredibly important thing" to "make inner London work".

Cllr Bowman added that the council had a close relationship with local health authorities and educational institutions, and pointed to the planned relocation of the Princess Street Group Practice to London South Bank University's campus on Borough Road as an example of joined-up thinking.

What the opposition says

• Look out for more coverage of Labour's pledges for Southwark soon.