A remarkable man whose active life was made possible by treatment at St Thomas' Hospital has died at the age of 67. 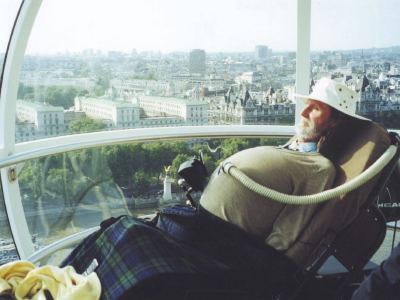 A remarkable patient who earned a place in the Guinness World Records Book as the world's longest survivor in an iron lung has died.

For more than 50 years John Prestwich MBE, who died on 27 February, was entirely dependent on a ventilator for every breath. In 1955, in the week of his 17th birthday, he contracted polio and was left totally paralysed below his chin, unable to breathe or cough. For the following 16 years he was permanently in hospital.

It wasn't until December 1971 when he married Maggie (who had been his occupational therapist) that he was able to leave hospital and live in his own home with Maggie providing most of the 24 hour-a-day care he needed.

John was one of the first ventilator-dependent polio patients to live away from hospital. This was only made possible by his referral to the world-renowned Lane-Fox Respiratory Unit at St Thomas' Hospital and the support that John and Maggie received from the unit's specialist doctors, nurses, therapists and technicians.

He earned a place in the Guinness World Records Book – the 2006 edition cites him as "the longest surviving iron-lung patient". In 1991 he was one of RADAR's 'Men of the Year' and, in 1994, he was presented with an MBE for his services to disabled people in the Queen's Birthday Honours

"John was a truly inspirational man and it was an honour to be his doctor," says Dr Craig Davidson, director of the Lane-Fox Respiratory Unit." "He left a lasting impression on everyone he met, and was a shining example of how positive life with a profound disability can be. With Maggie, he helped raise awareness of the possibilities offered by non-invasive ventilation and was also a fantastic fundraiser. His memory will live on for many years to come."

John's life depended on equipment which was specifically adapted for him. Without his Cuirass shell respirator, which fitted his chest like a breast plate, he would have died in minutes as he was unable to breathe for himself.
But, despite his problems, John was determined to live his life to the full. Thanks to the remarkable care and support of Maggie and the Lane-Fox Respiratory Unit, this is exactly what he did.

With Maggie constantly at his side as his full-time carer, John went to the top of the Eiffel Tower, flew in a helicopter, took a spin in the London Eye, went to France for the day via the Channel Tunnel and enjoyed watching polo, his favourite sport. He also travelled extensively in a specially adapted vehicle driven by Maggie and raised money for a variety of different charities. Through his inspirational life-story, his latest 'achievement', at the end of 2005, was to raise over Ł15,000 for Action Medical Research.

Maggie said: "I feel more than privileged to have shared John's life for over 45 years and to have had such a close, happy and loving marriage. He was the most important person in my life. I loved him more than words can express, and always will.

"We owe so much to the Lane-Fox Respiratory Unit staff who have made it possible for John to live at home. Both John and I could not praise the unit and the staff highly enough. Their attitude is that with the right support, it is possible for people with severe disabilities to live in the community. This allowed us to have a fantastic life together in the knowledge that they were always 'there' for us at any time."

The renowned Lane-Fox Respiratory Unit is a leading centre in the UK for people who have severe respiratory difficulties, many of whom require long-term mechanical breathing support via a ventilator. Patients from all over the country are referred to the Unit which can quite literally transform their lives.

The unit underwent a Ł1 million refurbishment last year, with much of the funding being raised by the Lane-Fox Respiratory Unit Patients' Association (LFRUPA). The Unit supports over 500 patients at home with a variety of ventilators and specialist equipment. Nursing, medical and technical staff are always available to support patients in their homes, as well as reviewing progress and maintaining equipment during routine hospital visits. The Unit also accepts patients from around the country who cannot be weaned from mechanical ventilation following critical illness.