SE1 resident Gavin McDermott, who works for IBM on the South Bank, is this week cycling from Land's End to John O'Groats to raise money for a children's hospice in Romania. 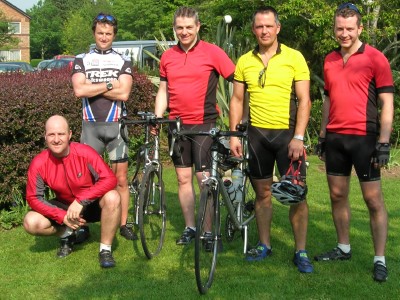 Five members of the six-strong team pictured at the end of stage 2 in Tiverton. L-R: Chris Livesey, Gavin McDermott, Sam Greenlees, Russ Herringshaw and Allan Robertson. All work for IBM on the South Bank, except Russ, who retired 2 weeks ago after 30 years in IBM.

Together with IBM colleagues and friends, he is raising money for Cry In The Dark. In 2000 the charity built and opened a home for 23 children with special needs in Comanesti, Romania. 'Casa Lumina' is now a home for life for these children. Presently it is building a new project which will be a hospice (respite home) for children with AIDS and other terminal illnesses also in Romania.

The team has achieved its Ł15k target, but the charity needs another Ł35k to finish the roof on the new hospice, and assistance with the same in Kenya.

• Find out more or sponsor the team