Did John Constable paint Southwark Cathedral as well as Salisbury? 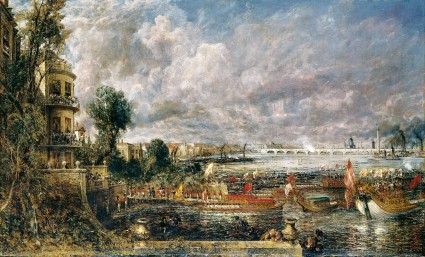 Tate Britain's huge exhibition of John Constable's large works brings together pictures not seen in one place even by the artist.

The climax of the show is the Opening of Waterloo Bridge which he completed in 1832 â€” fifteen years after the event. Constable found the work to be a struggle and the exhibition reveals four attempts.

The bridge was designed by John Rennie who lived nearby in Stamford Street and opened by the Prince Regent in 1817 on the second anniversary of the Battle of Waterloo. The Prince embarked on his barge at Whitehall and was rowed to the Lambeth Marsh on the south side. From there he walked across the new bridge accompanied the Grand Old Duke of York and the Duke of Wellington.

To record the occasion, Constable chose the view from the Whitehall riverfront, looking downstream with the South Bank's forest of smoking chimneys to the right.

The final version is clearly the best and a handy chart in the exhibition highlights the personal association and even a mistake.

To the left is the spire of St Martin-in-the-Fields where a year earlier Constable had married. To the right is the shot tower which became famous in 1951 as part of the Festival of Britain. It stood between today's Royal Festival Hall and the Hayward Gallery but was not there when the Prince Regent landed. It went up eleven years later when Constable was working on yet another version.

Above the bridge can be seen the still familiar line of City churches. At the very end, and obviously on the south side, is a square tower which looks very much like St Saviour's which we now call Southwark Cathedral.

One of Constable's many excuses for delay was that in 1820 he was advised to put the Waterloo painting on one side in favour of producing the Hay Wain. This more famous painting also had many forerunners which are brought together.

He was also distracted by working on Brighton Pier which has a similar composition to the Waterloo work and can also be seen here.

This is a dazzling exhibition and far more important than any to be seen this year at Tate Modern. It should not be missed for it will not be seen again in our lifetime.

• Constable: the Great Landcapes is at Tate Britain until 28 August; admission £10 (conc £8). The Tate to Tate Boat runs three times an hour from Bankside Pier.

• The fully illustrated catalogue edited by Anne Lyles, the Tate curator and authority on Constable who personally contributes an essay on the Waterloo work, is available price £34 hardback and £24.99 paperback.