National Theatre Studio to be refurbished

The National Theatre has confirmed plans for a £6 million refurbishment of its 1950s Studio building on The Cut (formerly the Old Vic Annexe). 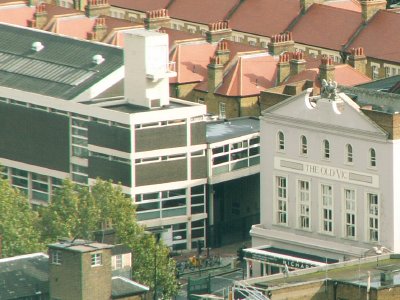 The National Theatre studio seen from the London Eye

The 15-month project will begin in August, and will effectively double the Studio's development capabilities with a second large workshop space; new facilities for dance and music theatre – including dressing rooms and showers, sprung floors and sound-proofing; and new facilities for writers. Infrastructure and technical equipment will be completely overhauled, and disabled access introduced.

The "New Brutalist" building was originally the Old Vic's annexe. It was listed earlier this year by culture minister David Lammy. The National Theatre bought the annexe in 1998 for Ł1.1 million

The work of the Studio will continue while redevelopment of its building is under way, temporarily relocated in spacious rehearsal rooms near the Oval provided by ITV, who also provided temporary accommodation for the Young Vic during the rebuilding of its theatre on The Cut.

The refurbished Studio will also provide a permanent home for the NT Archive, introducing improved conservation standards and increased access; and a dedicated space for the education's department's training and project work.

The NT says that bringing these two activities (both currently located in rented accommodation) together with the work of the Studio means that the National will be developing the artists and audiences of the future, and preserving a record of the past, under one roof.

Founded in 1984 by Peter Gill, the Studio is the National's centre of research and development, generating a broad and constantly evolving slate of work to feed the National's three stages and beyond. Recent and current projects include His Dark Materials, Stuff Happens, Coram Boy, War Horse and a new piece of music theatre by Damon Albarn and Roy Williams. The new NT Studio will be dedicated to the memory of Max Rayne, NT Chairman 1971-88.