The Life of Galileo at the National Theatre

Simon Russell Beale, in the guise of the great man himself, strides through the doors of the impressive set and addresses the audience, assuring them that 'Old times are over.'

However, it is when Galileo proves that Copernicus was right in believing that the earth moves around the sun that his real troubles begin. 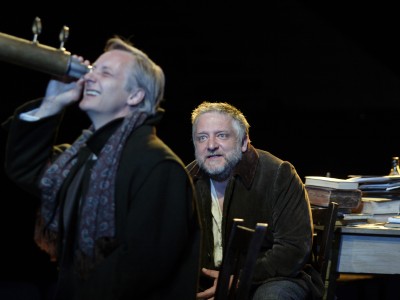 Following the actor's introductory speech, the revolving set places us in Galileo's living room in Padua as the scientist explains the universe, as he believes it to be, to his housekeeper's nine-year-old son, Andrea. The play, originally written in 1938, by Bertolt Brecht, now adapted by David Hare, functions as a pastiche of sorts, which occasionally makes reference to the time frame in which it was written – the cusp of World War II. Though in true Brechtian fashion, costumes, apart from the fact that his daughter tends favours red lipstick, largely consist of what the German playwright referred to as 'worn clothing.' Galileo's housekeeper enters the room intermittently, deliberating over prospective students. 'I teach and teach, when do I have time to learn?' the humble genius asks. But there is no shortage of pupils. For, as he tells his first hopeful visitor, 'Science, is all the rage nowadays.' When the Principal of the University comes to call, the news is not good, as he cannot justify a raise in salary for Galileo, unless he comes up with a new discovery. When the scientist assures him he's been working on an invention, which will amaze everyone, the dean is delighted. 'Freedom,' he commensurates, is 'good for business.' But Galileo is wary, and after his guest's departure, he advises his young companion not to speak to anyone about his 'ideas or hypothesis.' For, as he puts it, 'There used to be a lot of laws that explained little, now there are few laws that explain much.' The invention Galileo spoke of was, in reality, his scientifically enhanced version of the Dutch invented telescope, which, his benefactor mistakenly assumes could be purchased on any street corner. Like Brecht himself, Galileo was not above stealing ideas, and modifying them to his own, inventively imaginative ends.

Simon Russell Beale is thoroughly absorbing as Galileo, initially infecting the audience with his enthusiasm and drive, which gradually dwindles into philosophical, self-recriminating resignation. There are many fine performances in the play, notably amongst them, Tim McMullen as Galileo's friend, Sagredo, who tries to convince him of the danger of his discovery. Elisabeth Dermot Walsh is also strongly supportive as Galileo's caring daughter Virginia, as are Ryan Watson and Bryan Dick in the role of surrogate son, Andrea, as boy and young man respectively. Zubin Varla as the 'Little Monk' supplies half of an absorbing argument between Galileo and himself on the true nature of life. Whilst Andrew Woodall is suitably commanding, initially, as Cardinal Barberini, ultimately, as Pope Urban VIII. Oliver Ford Davis is clinical and chilling as the Cardinal Inquisitor. And, as Act III begins, Marcus Cunningham appears to be in his element as a tawdry carnival singer with his boots rather shakily planted in the Weimer period. That particular scene could have done with a little more Three Penny Opera and a lot less song and dance.

The Life of Galileo is three hours and ten minutes long, with two intervals, but the epic play is so engrossing that it never lags. In the first act, Galileo proves Copernicus' theory, while the second act allows for reactions to his discovery, and the third details the lasting impact it has made on the scientist's life, and, surreptitiously, the world. The Olivier's revolving set alternately becomes Galileo's home, ballroom, papal palace and scene of his last, sequestered living quarters. And throughout the course of the play, whenever the scientist looks through his telescope, his view of the heavens becomes our own as the circular backdrop above the stage mirrors the celestial scene, courtesy of the ingenious designs of Bunny Christie. 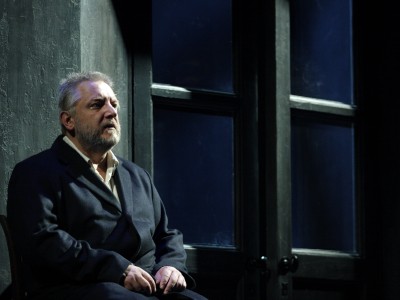 It is interesting to note that Brecht was so absorbed with The Life of Galileo that he was in the midst of re-writing it at the time of his death in 1956. Small wonder, considering the fact that his work was banned by the Nazis in 1932, and in a bitterly ironic twist, the playwright himself was investigated by the 'Un-American Activities Commission' in 1947, after fleeing Germany in favour of New York City. His final move to Soviet occupied East Berlin, where he founded the Berliner Ensemble, primarily for the purpose of staging his own plays, may have furthered his inadvertent identification with the great scientist. Brecht was always inspired by the idea that one individual can make a difference, and Galileo, as written by him, seems to share that belief. He was undoubtedly one of the most influential playwrights of the twentieth century and David Hare was amongst the many writers influenced by his work. Hare's adaptation charts new ground, which is further explored through the textural, attentive direction of Howard Davies. The earth-moving theory Galileo confirmed may not have been widely accepted in his own lifetime. But the wide-ranging, unforgettable performance Simon Russell Beale offers, as the great scientist, will undoubtedly be viewed as one of his finest to date.