In 1956, inspired by his trip to the Far East the year before, Benjamin Britten wrote his operatic mystery play, Curlew River. 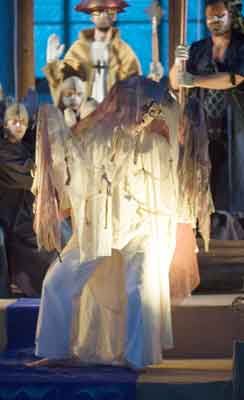 The opera's storyline is based upon that of the Japanese Noh play Sumidagawa by Juro Motamasa, which Britten had seen on his visit to Japan. Noh theatre, which was formalised in the 15th century by writer and theorist Zeami Motokiyo, combines music, chanting and dance. In Britten's re-telling, a mother searches for her young son in the Medieval Fenlands of East Anglia.

Curlew River is a tragic tale in which a weary, broken-hearted mother has, by a cruel twist of fate, been separated from her twelve year old son amidst the vast, reedy Fenlands. She has searched and searched to no avail. However, a ferryboat about to cross Curlew River momentarily rekindles her dwindling hope…

Mahogany Opera's atmospheric production begins in semi-darkness, as monk after candle bearing monk moves up the centre aisle of London's oldest Gothic church, Southwark Cathedral. As these mysterious hooded figures march in single file, their clearly resounding voices bear testimony to the excellent acoustics of this venerable space. Shadows bounce off the arched ceiling, as the singers reach their performance area, to the front of the choir stalls, where Sunday services are normally conducted.

John McMunn is truly mesmerizing in his role as the alleged Madwoman in search of her son. His performance was stunning, not only for the beauty and range of his voice, but also for its emotive qualities. It was not always necessary to be able to understand the words he was singing to be able to feel the relevant emotions. Simon Thorpe was also unforgettable as the Ferryman. His booming Wagnerian delivery conjured visions of hell fire within the dark recesses of the ancient cathedral. Samuel Evans and Ronald Nairne were both most effective as well, in their roles of Traveller and Abbot respectively. And Owen Liggett's haunting voice as the Spirit of the Boy sounded a chillingly poignant note. In addition to its impressive starring singers, Curlew River also features an assortment of fine performers playing Pilgrims and Azolytes, each of whom offers their own unique contribution to this professional production.

Mahogany Opera is a very talented company, and Curlew River is a very ambitious project for such a youthful troupe. However, at the conclusion of the performance, those who'd been listening with eyes closed off and on throughout broke into instant rapturous applause. Seasoned opera buffs were sure to respond in kind. But perhaps the real art of Mahogany Opera's mindfully detailed production of this unusual piece lays in the fact that it still manages to come across as an extremely compelling experience, even for those whose ears and eyes are not acclimatised to its musical score and influences.

• Due to the enthusiastic response to this production in Southwark Cathedral Mahogany Opera will be performing Britten's Noye's Fluddle in 2007, with, in the words of Artistic Director Frederic Wake-Walker, 'other plans to follow'. Their production of Curlew River on tour, 2006, continues on to Holy Trinity, Long Melford, Suffolk on 24 August at 8pm and concludes with performances at All Saints', Burnham Thorpe, Norfolk on 26 and 27 August at 8pm.