Local Lib Dem councillors took to the streets earlier this month to campaign against budget cuts to health services in Southwark as a result of overspends in other areas. 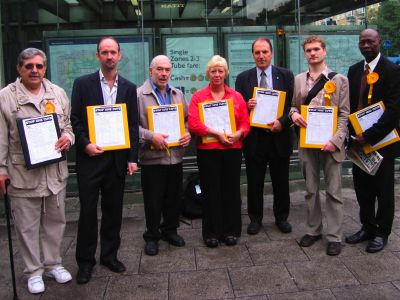 Southwark Primary Care Trust has balanced its books but cuts are being made because of overspends by NHS trusts elsewhere in London.

"I know how difficult it is for health staff to work in such current conditions." says Cllr Capstick, herself a practising nurse. "Nurses and other professionals are overstretched, with morale at an all time low due to ward closures, job cuts and constantly changing government targets. This is not in the interest of patients."

"These cuts are the responsibility of government mismanagement, with trusts in other boroughs overspending. It's totally unfair that people in SE1 should have to pay for their mistakes."