Former US president Bill Clinton posed for photos in Webber Street after attending a performance at the Old Vic, the theatre run by his friend Kevin Spacey. 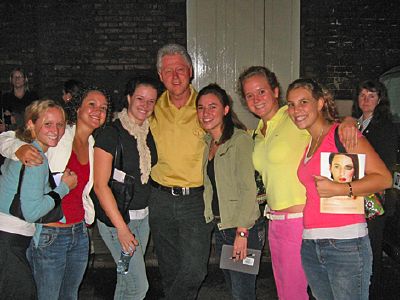 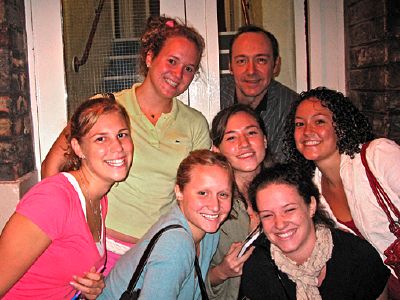 President Clinton was in Britain last month for a series of engagements including a speech to the Labour Party conference in Manchester. He took advantage of the visit to attend a performance of A Moon for the Misbegotten starring Kevin Spacey.

Six students from the University of Delaware on a study programme in London spotted the former president in the audience and introduced themselves to Mr Clinton during the interval.

"President Clinton then stood up and shook all of our hands and proceeded to tell us a story about how his grandfather lived in a house like the one in the play," said Jessica Hirsch who studies international relations and economics.

At the end of the performance the students headed round to The Stage Door in Webber Street to try to get Kevin Spacey's autograph.

"As we walked around the building we noticed that President Clinton was signing some autographs as he was leaving the theatre through a back door," said Hirsch. "He noticed us walking by and waved saying, 'Oh look, it's my Delaware girls.' That is when we asked for a picture which he kindly posed for."

Soon afterwards Spacey appeared at his specially constructed autograph flap beside The Stage Door and posed for another photo with the Delaware students.

Hirsh's verdict: "We were in shock for a while to be honest, but it was a fun night and surely one we will never forget!"

This was not Mr Clinton's first visit to SE1; nine years ago – visiting London as US president – he famously dined with Tony Blair at Le Pont de la Tour at Butler's Wharf.

And last year the ex-president appeared at The Old Vic via video link from New York when he took part in a Labour Party election rally.