Gorillaz artwork by Designer of the Year Jamie Hewlett has been unveiled on the hoardings around the Royal Festival Hall. 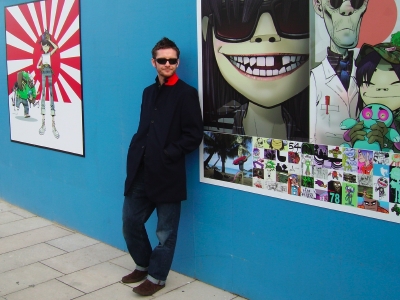 Jamie Hewlett poses with his artwork outside the Festival Hall 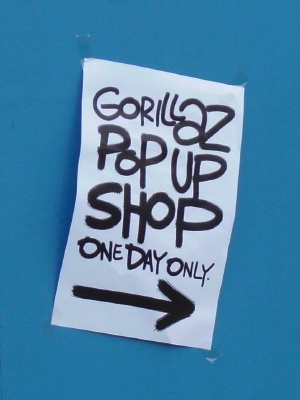 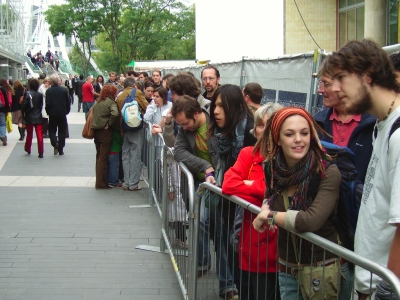 The queue along Festival Walk

A so-called 'pop-up shop' selling limited special editions of the Gorillaz' autobiography Rise of the Ogre attracted many fans; the queue stretched the full length of the Royal Festival Hall.

More than 150 metres of artwork of the four fictional animated band members – singer 2D, bass guitarist Murdoc Niccals, drummer Russel Hobbs and guitarist Noodle – will be displayed on the hoardings around the South Bank Centre site until February 2007.

The 'virtual band' is the work of Jamie Hewlett, named Designer of the Year by the Design Museum earlier this year

"This exhibition really is a truly wonderful coming together between graphical imagery, art and er â€¦ well, what looks to be like some sort of temporary protective wooden coverings", said Murdoc Niccals, bass player and mastermind of Gorillaz.

The artwork will be displayed on the hoardings around the front of the Royal Festival Hall, the Festival Riverside restaurant development and on Festival Square, Belvedere Road and alongside Hungerford car park.