City Hall is showing off some of the treasures from London's Transport Museum during refurbishment of the Covent Garden venue. 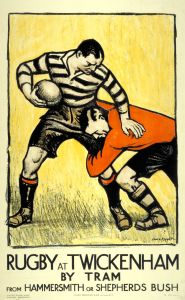 The exhibition is a series of 38 London Transport posters for London sporting fixtures between 1913 and 1939.

The sporting events include the Boat Race, Derby, Rugby League, Football and Wimbledon. Attention is drawn to the poster's central theme captured in an action shot of the sport being advertised.

Two posters of significance include the Olympic Games in 1948 and a poster titled 'Underground for Sport'. Underground for Sport by Gerald Spencer Pryse is a football poster encouraging mass attendance as it reveals stands full of spectators with an inscription reading, 'He knows nothing, who does not mix with the crowd."