Happy Days at the National Theatre

If Beckett's minimalist, darkly comic Happy Days was meant to shake its audiences out of their apathy, then Deborah Warner's production may have been designed to rattle their perception of the play itself. 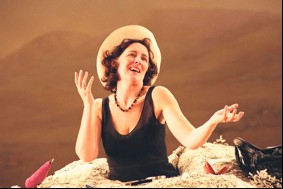 Warner's production of Beckett's seminal play is mandatory viewing for a number of reasons. Paramount amongst them is the thoroughly engaging performance of Fiona Shaw as Winnie, eternal optimist gone underground.

Tom Pye's impressive set seems to open the show before the play actually begins. Its upheaved, arid landscape provides an appropriately sparse canvas for sun-bleached soul baring. As an opaque white screen balloons onto the dry earth two insect-like figures scurry behind it.

Winnie, gloriously portrayed by Fiona Shaw, continually seeks to rise above her inexplicable, insurmountable adversity by literally, living in her head. Buried up to her waist in debris made up of dried earth, withering weeds and huge concrete slabs suggestive of annihilation, she offers a running stream of consciousness monologue about the state of her mind and morale.

Subtle, physical details serve to enhance the sparse scenes, heightening a sense of expectation. Husband Willie sits, back to the audience, engrossed in what one assumes must be a very old newspaper, barely acknowledging his wife's continual philosophising. Her inborn optimism never flags completely as she hums the Archers theme or busily describes bits and pieces from the large black handbag by her side. We listen as she directs him back into his hole in the ground, 'not head first dear,' and asks him to 'sing his song.' But Willie always seems to have better things to do, anything, to keep him from engaging with her.

The interval brings yet another surprise from Warner's seemingly, endless palette. Act II finds Winnie in up to her neck, but thankful, as ever, for small mercies. Tim Potter, who played the Soothsayer in Warner's production of Julius Caesar, does a fine job with Willie's grunting persona, allowing an ambivalent glimpse of humanity in the eleventh hour. Fiona Shaw gives a mesmerising performance as Winnie, as notable for its depth as for its many layers.

Jean Kalman's full on lighting seems to make the auditorium itself feel increasingly parched, while a sparse sound score by Mel Mercier and sound design, courtesy of Christopher Shutt find inconspicuous places in the cerebral proceedings.

Warner's refreshingly accessible revival of Happy Days is one that Beckett himself may have approved of, for the play's sense of loneliness, futility and hope not only remain intact, but have now also, happily, become themes that we can all relate to.