A glass tower made of wine glasses was created by the Revd Sheryl Anderson as she preached to a surprised congregation at a service marking the start of a night shelter project. 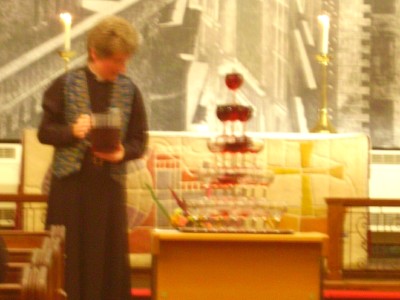 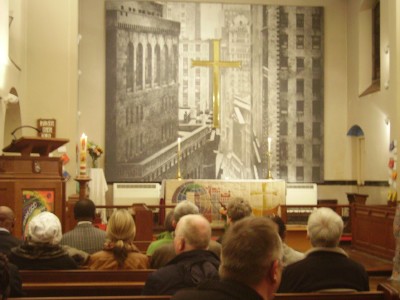 ROBES is an eight-week project which will see seven churches offer food and accommodation to 10 homeless people for one night in seven.

The launch of the ROBES Project was held at Christ Church Southwark in Blackfriars Road and attended by volunteers and representatives of Southwark churches of many denominations.

The ROBES Project takes its name from the areas where the churches are located: Rotherhithe, Bermondsey and the South Bank.

"So many Christians of different backgrounds have had to come together and trust each other to make this possible" said Sheryl Anderson – minister of Bermondsey's Methodist Central Hall – who declared herself excited by the outcome.

As juice was poured into the the top glass on the tower she described how abundance like grace was cascading down to give enough for all the glasses and added that there would be enough even for a larger tower. She also stressed that every person in the project was essential.

Simon Hughes MP, who arrived direct from the Brussels Eurostar train to support the project, said that it was the best sermon he had ever "seen".

The MP recalled that when he was elected 24 years ago this month he found that housing was the issue raised most by his new constituents. Today, he said, it remains the matter most mentioned.

"We have been able to build a tunnel under the channel and yet the most common issue that comes through the door of a Member of Parliament representing the richest capital in Europe is still housing."

The music was led by Peter Fuggle from Monnow Road Baptist Church and a Bible passage was read by Bermondsey Methodist Christina Thompson.

The Bishop of Woolwich, the Rt Revd Christopher Chessun, gave a blessing.

Other local churches have provided support and volunteers.

All the clients are being recommended by the Manna Centre in Melior Street. Anyone wishing to volunteer to help the ROBES Project for an evening, night or early morning shift should contact Project Co-ordinator Nikki Jones on 020 7407 2014 or email [email protected]