A 15-year-old was stabbed at a bus stop in New Kent Road on Thursday afternoon. 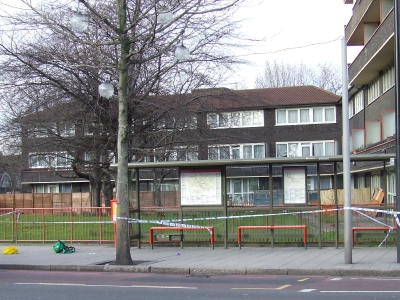 Police were called to reports of an incident at the bus stop outside Albert Barnes House at about 2.15pm.

A 15-year-old youth was taken to a south London hospital suffering from stab wounds. The teenager's injuries aren't believed to be life-threatening.

Officers are trying to trace two youths seen running away from the scene.

Meadow Row was closed to traffic for most of the afternoon and the incident led to long tailbacks in all directions around Elephant & Castle.

The incident comes on the same day Metropolitan Police commissioner Sir Ian Blair announced the setting up of a new temporary taskforce to bring together and co-ordinate the Met's response to violent crime involving young people in Southwark and Lambeth.

Simon Hughes MP welcomed the new police initiative: "The extra protection which the Met is putting into south London is very welcome. Children and young people are always the most vulnerable and the most likely to be the victims of violent crime.

"There's one overriding priority – reducing fear amongst young people on the streets and in the estates. The police as well as political and community leaders must do everything in their power to deliver this."