More than a thousand Londoners have helped to create a giant artwork depicting a panoramic view of London that's on display at City Hall. 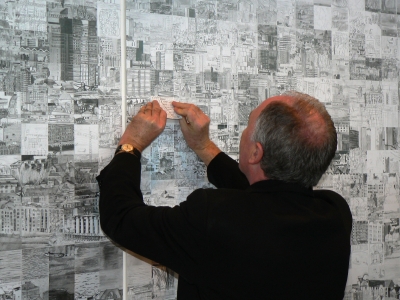 The Mayor adds his sketch to the panorama 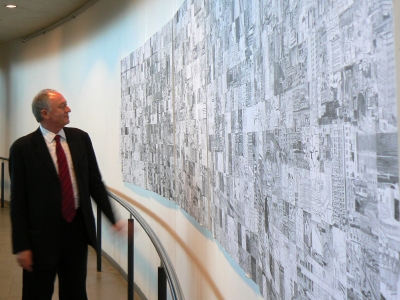 The artist, who is known for his architectural painting and city commissions around the world, based the work on a photograph he took from the top of Canary Wharf. He divided the image into 1280 squares measuring three inches each. Members of the public were then invited to contribute a pencil drawing on an A4 paper based on a specific section of the picture.

The People's Panorama was created for the national launch of The Big Draw 2006 held at Somerset House last September, when visitors, led by architect Lord Foster, added their piece of London to the panorama. It then moved to the Museum of London for four days and many contributors returned to see the work develop and reach its completion.

"The project was made with huge enthusiasm," says Ben Johnson.

"There was a great sense of concentration as people did their individual squares and then a sense of pride at being part of a collective experience.

"There was not one bad drawing among them and each was unique and special to the person that made it. Even the initially reluctant surprised themselves and many people's enthusiasm to do multiple squares had to be restrained. It truly is The People's Panorama.'

Mayor of London Ken Livingstone has also made a sketch which he added to the panorama at City Hall on Wednesday. He said: "This is a picture of London by Londoners, who have created a magnificent view of our city. The People's Panorama is a wonderful illustration of how Londoners from all walks of life come together to make this great city."

As well as more than one thousand members of the public that have added to the large-scale work, from schoolchildren to pensioners, other contributors include Lord and Lady Foster; artist Peter Blake and David Marks from London Eye designers Marks Barfield;

After being displayed at City Hall, Ben Johnson is planning to loan The People's Panorama to the Southwark-based charity Paintings in Hospitals, which lends original works of art to improve the environment of hospitals and other healthcare organisations.

Paintings in Hospitals runs the Menier Gallery in Southwark Street.

Kingston Hospital will be the first hospital to exhibit the piece in the main reception area of the Bernard Meade Wing.

The People's Panorama will be on show at City Hall until 10 April. Entry is free.