The Big Brecht Fest Part 1 at the Young Vic

Bertolt Brecht is believed by many to be one of the most influential dramatists of the twentieth century. 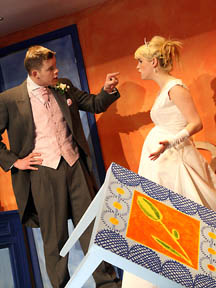 Classics including Mother Courage and her Children, The Caucasian Chalk-Circle and The Good Person of Sezuan are widely known as Brechtian forms of 'Epic theatre'. These innovative and didactic works are still performed widely today and Brecht is universally credited for his seminal approach to political theatre and its potential to effect change. With such renowned successes it would be easy to forget about the array of work that the younger practitioner produced, long before the employment of his trademark techniques such as the 'alienation effect'. In avoiding the classics, the Young Vic has embarked on a season of Brecht's shorter, earlier plays, rediscovering this talented playwright in a unique and refreshing manner.

Translated by well known impressionist Rory Bremner, the first of a double bill, A Respectable Wedding, takes a farcical look at a recently married couple, their wedding guests and the cracks that the seemingly blissful occasion fails to disguise. As the compulsory alcoholic beverages start to flow, the strain of keeping up appearances makes its own appearance and a catastrophic series of events begin to unfold. Astutely directed by Joe Hill-Gibbons, the actors perform on a miniature and elevated set, propped up on huge stilts with furniture that becomes analogical to the extent that it literally falls apart as various relationships begin to break down. Actually, the Brechtian themed set design (by ULTZ) is probably the most striking reminder of the author here. An enormous painting appearing to depict the interior of the exposed set hangs in the auditorium. On closer inspection however, one realises that the painting is not an exact representation, throwing reality into question as a result.

However, with a mixture of familiar popular song, an ipod and audacious sexual debauchery, the play is stamped with a 21st century seal and although it maintains itís modern and quirky edge throughout, the contemptuous nature of middle-class bourgeois society that Brecht was commenting on does not disappear ñ it is merely replaced by our own. With wonderful performances from the likes of Jemina Rooper and Martin Savage, Bremnerís adaptation is a witty and delicious treat.

In comparison to A Respectable Wedding, the second play strikes a very different note. The Jewish Wife, translated by Martin Crimp, is an intimate and moving account of one womanís decision to leave her oblivious German husband in an attempt to protect both of them from the growing domination of a NAZI government. A succession of phone calls to family and friends reveal a frightened, ordinary woman clinging to the last semblance of normality as her world falls apart. Brechtís didactic agenda is fully unveiled as she questions the allegiances and priorities of her society, including those of her husband, and in the final harrowing episode we see a man exposed as nothing more than a coward, willing to sacrifice his wife to save himself.

Beautifully performed by Anastasia Hille and Sean Jackson, the play takes place in a cavernous pine bedroom complete with double bed, telephone (with a voice at the other end) and functioning hairdryer. And while Hildergard Bechtler's meticulous set appears at first as very naturalistic, there is a calculating coldness and rigidity in the design that moves between set and performers working to separate spectator from character and draw attention to the social and political comment. Katie Mitchell's direction has touchingly captured the spirit of the piece while Gareth Fry and Paul Clark's eerie and poignant sound design plays a vital role in accentuating the specific mood, further complimenting this Brechtian gem.

Both plays continue until 14 April and both are well worth a trip to Waterloo. However, be prepared to queue for returns as unsurprisingly, both are also sold out!