A Karaoke Wedding at the Union Theatre

With a chorus of scantily clad 'Shoop' girls displaying placards, a nonchalant singing vicar and a general attempt to lampoon the tradition of matrimony, A Karaoke Wedding seeks to explore the fallacy of marriage, love and romance. 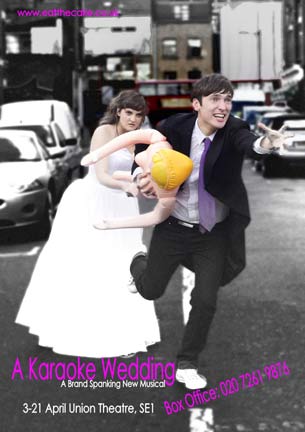 A Brechtian inspired theme is evident from the onset. Written by Harry Blake and John Hilton, the performance progresses in episodes and provides glimpses of wedded frustration in a variety of guises. From contrasting age perspectives, 'Perfect couple' (Suzy Harvey and Adam Lea) along with 'Ruby couple' (Andrew N Hill and Fiona Whitelaw) prompt reflection on a diverse range of demands and complexities relative to married life. Rejected sister of the bride Clara (Leanne Jones) renders some thought concerning life as the average singleton and a confession from Father O'Loughlin (Stephen Glover) in the men's toilets throws light on the fallibility of man – without exception!

However, the attempt to incorporate Brechtian technique is somewhat half-hearted as placards simply become illustrations of the unfolding action rather than a serious critique and the ending is essentially comparable to that of a fairytale 'happily-ever-after'.

Nevertheless, this production is entertaining and humorous. Harry Blake's musical score contains a multitude of witty and satirical numbers, accentuating a gifted and jovial cast. Set design by Edward Lister and Romy Strubel is simple, flexible and effective and Gabby Vautier's direction and choreography makes good use of the Union's small space. A Karaoke Wedding gleefully pokes at the ritualised ceremony of 'getting hitched' and will leave you with a big grin on your face if nothing else.