An online walking route planner for central London created by Waterloo-based Jamie Wallace has scooped an award for its contribution to tackling climate change. 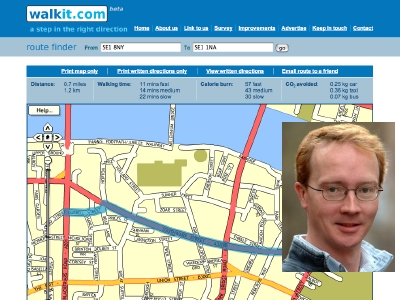 The Awards, run by Sustain IT and supported by BT, seek to uncover pioneering projects that identify and promote the benefits of information and communication technologies.

The site provides a point-to-point journey planner that creates tailor-made walking route maps and journey times. It even estimates how many calories you should expect to burn and how much carbon you will save.

Three-quarters of users say the site is fast, easy to use and well designed, while 90 per cent say they are likely to recommend the service to others.

Its creator, Jamie Wallace, lives in Waterloo and stood as a Green Party candidate in Lambeth's Bishop's ward in the 2006 local elections.

Wallace launched walkit.com in 2005 with support from UnLtd, the Foundation for Social Entrepreneurs.