Waterloo's youth football club is celebrating an amazing array of cup and league wins. Local businesses are being urged to sponsor the club next season. 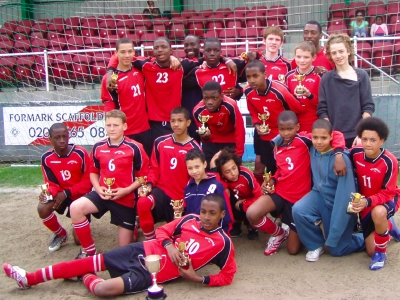 In the Tandridge League Cup Final they beat semi-pro club Whyteleafe FC 9-8 on penalties. They also finished top of the Tandridge Junior Football League A Division.

The younger teams have had a successful year too; the under-10s won the SE1 Premiership; the U12s finished third in the Tandridge League A Division having been promoted from the C division last season; now the U13s are following in their footsteps and will also be playing in the A division next season.

It's not all about trophies though; the club stresses its achievements developing young players at grassroots level. Several players from two teams have progressed to professional clubs.

Through its various teams the Waterloo Sports and Football Club represents a significant provision of healthy outdoor activity for local children and young people.

In order to sustain and extend its work the club is looking for sponsorship from local businesses for the new season starting in August/September.

To find out more about the club or to discuss sponsorship opportunities call Maria on 020 7261 9417.