Southwark Police are appealing for witnesses to an incident in Decima Street which left an off-duty detective with a broken jaw. 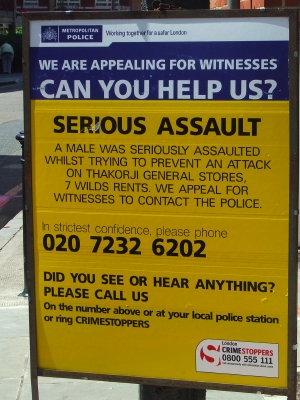 On Wednesday 17 May between 10.45am and 11.15am an off-duty detective was assaulted by a number of youths dressed in school uniform in Decima Street.

The officer had intervened after a number of children had stolen property from Thakorji General Store in Wild's Rents.

After attempting to detain one of the children he was struck several times around the face causing a broken jaw in several places leading to four hours' surgery at Kensington and Chelsea Hospital.

"There are plenty of people who witnessed this incident and know who is responsible," says DS Dave McGillicuddy of Southwark CID. "I urge them to come forward in the strictest of confidence."

The officer is currently recuperating and is expected to be off work for at least 6 to 8 weeks.

Police believe that there were up to 30 youths present but only three to four involved in the actual assault.

The children were approximately 16 years old and officers believe them to be local to the area.