Ed Mirvish, the Canadian businessman who bought and restored The Old Vic theatre in Waterloo 25 years ago, has died. 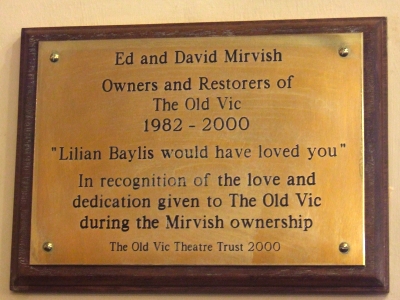 Plaque to Ed and David Mirvish in the Old Vic's foyer

Edwin Mirvish died in Toronto on Wednesday at the age of 92.

Mirvish – who made his fortune as the owner of Honest Ed's discount store in Toronto – bought The Old Vic for Ł550,000 in 1982 despite never having visited the building.

He initially budgeted Ł1 million to restore the theatre, then doubled the sum once he had seen for himself the scale of the work required.

He presided over the rebuilding of much of the theatre, returning it to its 1871 layout and adding extra seats. The result – unveiled in November 1983 – was described as "a curious mixture of magical restoration and Disneyland pastiche" by The Guardian.

During the 1980s and 1990s the theatre experienced mixed fortunes and the Mirvish Family put The Old Vic on the market in 1998.

The building's future as a theatre seemed bleak and conversion to a pub or lapdancing club was proposed.

A plaque recognising the work of Ed Mirvish and his son David was unveiled in the foyer of The Old Vic in 2000.

In 1998 David Mirvish said of Waterloo and north Southwark: "I'd say this is the only part of London with explosive potential. That's got to be good for The Old Vic."

A great showman and salesman, Ed Mirvish was noted for his generosity. To celebrate his 92nd birthday last year 20,000 queued up in the aisles at Honest Ed's for a free hot dog.

Mayor of Toronto David Miller said: "It is a truly sad day in the city of Toronto. Today we mourn the loss of Mr. Toronto, Ed Mirvish; a man who can only be described as a local hero."

Flags at Toronto's City Hall will be flown at half-mast on Thursday in honour of Ed Mirvish.