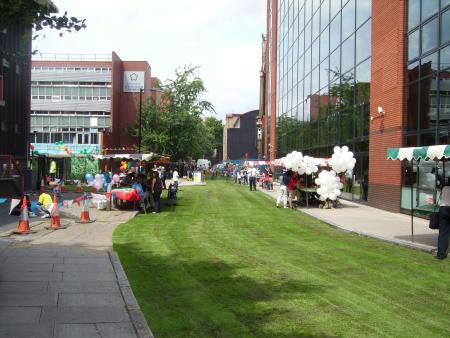 Keyworth Street was laid with a closely fitted turf carpet and bales of hay were piled on the pavement. The transformation was staged on Saturday to provide a setting for University's first Village Fete which was aimed at people who live in the local area.

The event was opened by the Mayor of Southwark Cllr Bob Skelly who welcomed the both the University's involvement in the community as well as its future plans for the Elephant & Castle.

Those arriving early for the opening ceremony were entertained by South London Jazz Orchestra. Other attractions included stalls, a coconut shy and salsa dancing.

Announcing the attendance figures, an LSBU spokesperson said the Village Fete was an acknowledgement of the importance of community relations. The grass and hay have been donated to a city farm.