Flypast and gun salute for veterans' ceremony at HMS Belfast

A Lancaster and a Eurofighter Typhoon flew across the Pool of London on Wednesday to mark the presentation of the 500,000th Armed Forces Veteran's Badge. 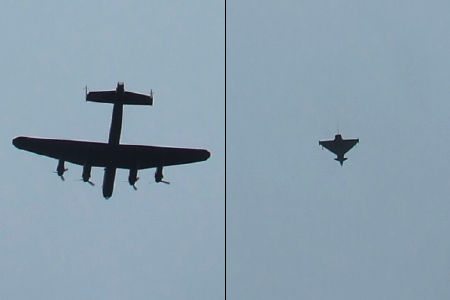 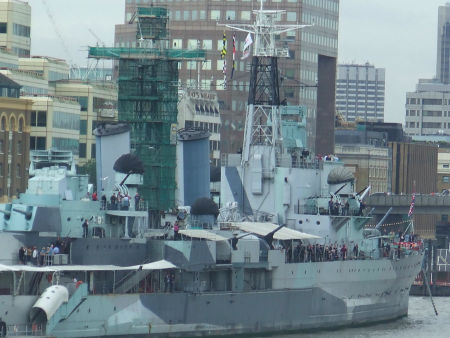 The ceremony took place on the decks of HMS Belfast

"I am deeply honoured and thrilled to be the recipient of the half millionth HM Armed Forces Veteran's Badge from the veterans' minister," said Sonia Harford. "I will cherish my badge and wear it with a great deal of pride, especially as it has been presented to me in such eminent company as Lord Healy, the recipient of the first Veteran's Badge."

During the ceremony the Battle of Britain Memorial Flight's Lancaster and a Typhoon multi-role fighter from No 29 (Reserve) Squadron performed a flypast above the Pool of London. Both aircraft are based at RAF Coningsby in Lincolnshire. HMS Belfast also fired a gun salute.

Sonia Harford from Birmingham, who served in the Royal Logistics Corps, was one of 20 veterans to receive badges from armed forces minister Derek Twigg on board HMS Belfast. Sonia Harford served in Germany, Cyprus and Northern Ireland during her 10 years in the Army. After leaving the Services in 1999, she worked as a medical equipment supplier before moving to Hong Kong to teach customer care standards to Chinese hospital staff.

Sonia returned to the UK in 2001 and now works as an employment consultant for the ex-Service charity Regular Forces Employment Association (RFEA), which helps former Service personnel find employment. RFEA is part of the Career Transition Partnership, a public and private sector partnership between the MoD and civilian firm Right Management which provides resettlement help and advice to people as they leave the Armed Forces.

The HM Armed Forces Veteran's Badge was launched in May 2004 and since then its availability has been gradually extended to all those who served at any time up to 31 December 1994.