The Curse of the Werewolf at the Union Theatre

When the Bancroft Family arrive in Walpurgisdorf in 1922, little do they know the events that preceded their arrival 30 years ago. For the town holds a terrible secret; it is the home of werewolves! 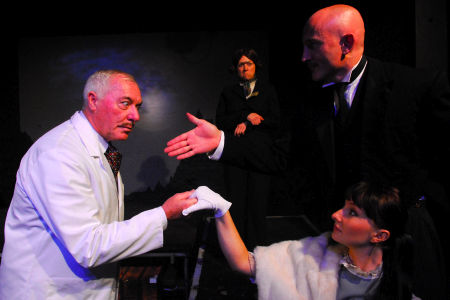 Can the Bancroft's butler D'Arcy save Kitty Bancroft from becoming a dog's dinner and the bride of the local Baron? And will Professor Steiner and Dr. Bancroft unravel the mystery of the lycanthropic locals before it's too late?

I love a good melodrama. It's all too easy to forget that melodrama is not just a term to describe your mother over-reacting when she finds there's no milk in the fridge, but part of the rich history of theatre. A common misconception is that melodrama is easy to do; it is, after all, over-acting. But any actor can tell you that they have to fight against every fibre of their being to over-act in a theatre dominated by naturalism. It is such an under-rated genre because it's the only time where cliches, predictable plot and familiar characters are forgiven for the music, the screams of the damsel in distress and the evil cackle of the baddie.

Andrew Linford's interpretation of Ken Hill's The Curse of the Werewolf has managed to make the melodramatic most of the set (and budget) to produce a wonderfully lo- tech piece that has the feel of stepping back into a 1930s music hall. The tendency to 'ham it up' has quite graciously been scrapped as he obviously demanded the strict discipline required to pull off a piece of this kind. Outstanding performances came from Sarah Whitlock who plays the overly proper Mrs. Bancroft, and is reminiscent of an eccentric aunt straight out of any of Wilde's comedies. Alexis Caley, who plays our hapless heroine Kitty Bancroft, commands her role with the bright-eyed naivety of a young girl of the 1920s that makes the audience want to put her over their shoulder and carry her away whilst twiddling their respective moustaches. Special mentions go to Kirstie Senior (who doubles up as Ingeborg and Frau Gessler) and newcomer Robert Lyon (who plays Ernst the Hunter, the Police Sergeant and anything else that needed filling in), as the finer details are important in these kind of plays making Villager Number 3 just as important as The Villain. Thanks to them, the show glides with the consistency and humour required to keep the stock characters in full flow. However, the whole cast do a fantastic job of sticking to their role; from the mad scientist to the dashing (yet understated) hero, a firm understanding of what is required emanates from the actors.

A melodrama is nothing without music of course, so Andrew Swift must take some of the credit for this production's success. His constant piano accompaniment provided the perfect traditional backdrop, and well done to him for choosing to play alongside the cast (as would have been required in period), instead of opting for bigger sound arrangements. It added to the authentic feel of the piece.

The charm of this play comes from its cut and paste style. Who knew that a smoke machine, some glove puppets and a Halloween mask could be the basic ingredients to a successful show? Lynford has strived to keep it simple, and its simplicity is its success. The lack of any grand special effects or complicated lighting plots reminds us of what theatre is really about, and what theatre can be when there is clarity of vision.

The Union Theatre provides a wonderful, welcoming ambience and great backdrop to the play. From the 'shabby chic' of the bar right down to the vintage vending machine in the toilet, it has the feel of being one of the remaining places in London unchanged by industrialisation and progress, and one of the last places in London without criminal bar prices.

Forget lavish sets and teary moments; this is a good old, knees-up-Mother-Brown, let's have sing around the Ol' Joanna kind of show. Audiences are guaranteed to be chuckling as the cast serve up the good, bad and the, quite literally, hairy. Adults who have a secret hankering for pantomime, those who think spectacle cannot be done on a low budget and theatre aficionados who want to let themselves go in a truly kitsch and antique way are requested to buy their tickets now!