Guy’s Tower to be spruced up

Plans are afoot for the world's tallest hospital building - Guy's Tower at Guy's Hospital - to be cleaned up or even reclad by 2010. 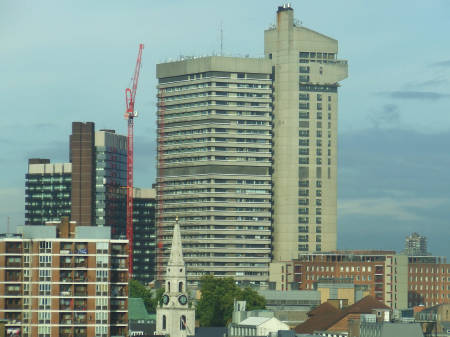 Guy's and St Thomas' NHS Foundation Trust has issued a contract document inviting firms to tender for the project management work "associated with the refurbishment of the external structure and facia cladding and fenestration of Guy's Tower at the Guy's Hospital site to provide an architecturally iconic, structurally sound, sustainable and energy efficient buiding compliant with current standards fit for the next 25/30 years".

The 34-storey Guy's Tower dates from 1974 and boasts stunning views across central London. But the Brutalist building isn't always popular with those looking at it from the outside.

The building's use has changed over the past 30 years. Currently the upper floors are occupied by the King's College London dental school with medical departments on the lower floors. A hospital trust report published at the beginning of the year revealed that only one ward in the tower remained in use.

The area around Guy's Tower is likely to change significantly in the next few years – especially if the planned Shard of Glass/London Bridge Tower is built.

The hospital trust recently agreed a new estates strategy for the future of both St Thomas' Hospital and Guy's Hospital.

Speaking at the foundation trust's annual public meeting – held earlier this month at the Greenwood Theatre – acting chief executive Tim Higginson described the estates strategy as "a landmark piece of work crucial to the future of the organisation".

Capital development manager Alastair Gourlay told the meeting that the strategy will "unlock the value of our sites" ... "without selling the family silver".

The strategy envisages a continuing reduction in the number of inpatient beds at both of SE1's hospitals as day care and outpatient treatment becomes more common.

A major change at the Guy's site is likely to be the development of a new cancer centre on the site currently occupied by the Greenwood Theatre and the Woolfson building.

The trust is also expected to dispose of New Guy's House and has zoned the buildings on the Snowsfields side of the hospital site as having "new development potential".

At St Thomas' the trust has also been considering the possibility of a commercial development over the north wing car park at the entrance to the hospital facing Westminster Bridge Road.

• The trust is inviting patients and local residents to help shape the plans for the two hospitals; a leaflet can be downloaded from the trust's website.

Does Guy's Tower need a new look or do you like it as it is now?