A group of activists arrived in SE1 this weekend at the end of a 1,000-mile march from Northern Ireland that has brought the issue of climate change to the doorsteps of people across the country. 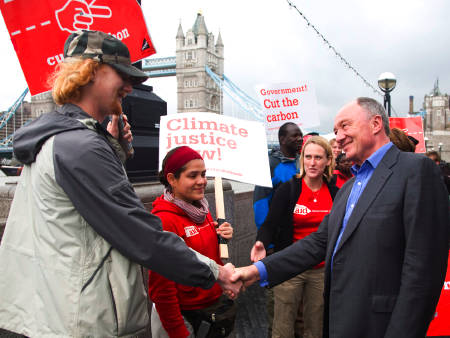 A core team of 18 marchers from the UK and the developing world left Bangor in Northern Ireland on 14 July. The Cut the Carbon march was organised by Lower Marsh-based Christian Aid to raise awareness of the impact climate change is having on the world's poorest people.

The marchers were greeted at Lambeth Palace on Monday morning by senior bishops. Later in the day Mayor of London Ken Livingstone and his deputy Nicky Gavron joined the walkers on the riverside outside City Hall.

A 'last night of the march' event with music was held at St John's Waterloo on Monday evening.

On Tuesday hundreds of supporters joined the marchers for their final mile from Tooley Street and across London Bridge to the London Stock Exchange. A service at St Paul's Cathedral marked the end of the 11-week march.

"We've reached out to thousands of people to inspire them to campaign to tackle climate change and have delivered a powerful message to the government that it must act justly by reducing our emissions," says Tim Jones, 26, a walker and World Development Movement activist from Herne Hill.

Mayor of London Ken Livingstone said: "I would like to welcome the Christian Aid campaigners to London. The Cut the Carbon march has brought together campaigners from both the developed and developing world standing shoulder to shoulder to make it clear that we in the wealthiest countries in the world cannot sit by and watch our carbon emissions spiral out of control, while those in the global south increasingly suffer the consequences of climate change. I am pleased to be here today to show my support for their efforts."