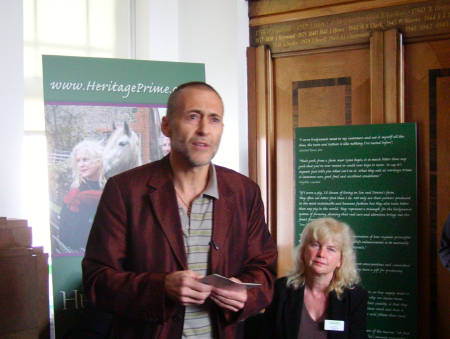 The famous chef was launching the first Biodynamic Food Fortnight promoting biodynamic agriculture, an organic approach to farming based on a holistic and spiritual understanding of nature.

Biodynamic agriculture was pioneered by Rudolf Steiner (1861-1925) and Michel Roux said that he too believed in a proper use of seasonality and a recognition of the importance of the moon and solar system.

"My late father-in-law was a farmer and he always used to plant his vegetables at certain times of the year. My late grandfather was a hairdresser and he used to swear that the best time to cut hair was after a full moon as the hair would grow back stronger. That is wacky.

"But Biodynamic is about respect, respect for land and respect for the animals. My father reared rabbits and pigeons for the table and I remember fondly him looking after them and kissing and cuddling them.

"Biodynamic is a more expensive way of producing food at the moment. But I genuinely feel good after eating it. Money should not be the object as it is the quality that matters. Soon we will soon be embracing biodynamics. Biodynamics will no longer be a wacky term. If you think about organics fifteen years ago it was very wacky. Biodynamics is the way forward."

Michel Roux was introduced by Denise Bell of Heritage Prime in Dorset who supplies him with organic meat. Thanking her he said: "One thing that really stuck me was that each invoice had the name of the animal on it. I knew that the animal had had a life and been looked after."

Among those present for the launch was Wendy Cook who signed copies of her book The Biodynamic Food and Cookbook: Real Nutrition That Doesn't Cost the Earth.