Estate agents Knight Frank have revised their central London house price index to include the SE1 riverside for the first time. But prices have risen more slowly south of the river than elsewhere. 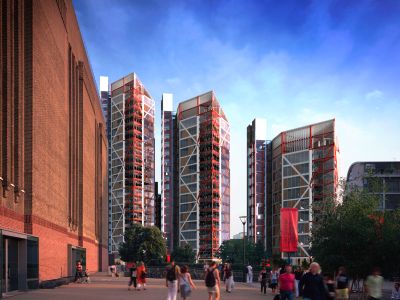 Is Bankside a future 'super-prime' property market thanks to developments such as these Richard Rogers Partnership-designed towers in Holland Street?

For the first time since a mid 1990s expansion to include Notting Hill, Knight Frank has adjusted its central London prime house price index to include the SE1 riverside from Westminster Bridge to Butler's Wharf, an area it describes as 'Southbank'.

Over the 12 months to September 2007 prices along the SE1 riverside rose by 17.3 per cent – well below the level experienced by locations like Belgravia or Knightsbridge.

Across central London as a whole prices rose by 36.5 per cent during the year to September 2007.

Knight Frank attributes the price differential to the surge of 'super-rich' buyers in Belgravia, Chelsea and Knightsbridge and "a lack of really high quality stock" south of the river.

The agents are touting Bankside as a future "super-prime" property location to rival Butler's Wharf and Shad Thames with developments such as Bankside Lofts in Hopton Street seeing annualised price growth of close to 25 per cent.

With developments such as the Holland Street Buildings (aka Bankside 4) designed by Richard Rogers Partnership in the pipeline, Knight Frank says that Bankside will compete head-on with established markets in west London.

Knight Frank says that in the short to medium term the SE1 riverside will substantially outperform central London in terms of pricing growth.