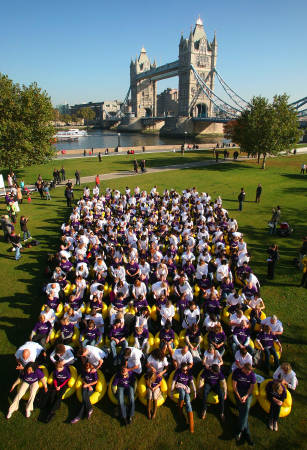 They took part in a Guinness World Record attempt to be massaged for fifteen minutes by 154 professional massage practitioners.

The largest simultaneous group massage has never been attempted before, so the group were set a target to break of 100 people by Guinness World Records.

Two adjudicators from Guinness World Records were on hand to certify the new world record.

"As World Record attempts go, this is one of the most relaxing I've witnessed," said adjudicator Kim Lacey.

"My job was to check that all 154 people were properly seated and that the massage routine started and ended with the correct professional techniques."

Loyalty card Nectar staged the stunt to mark the launch of its new range of treats.

"Hopefully this treat will help people to realise there's so much more you can do with your Nectar points, like spend them on health club passes, meals out or cinema tickets," explained Nectar's John Sheekey.