Terror 2007 at the Union Theatre

I could feel a frisson of nerves from my sister who accompanied me to the Union Theatre on this cold and crisp October evening. 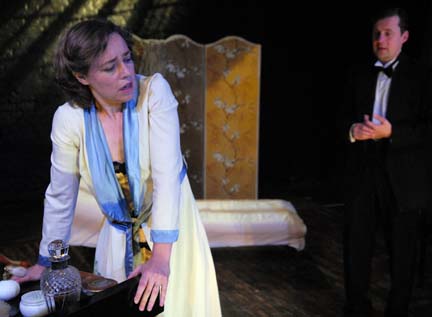 She dislikes horror when it is distanced by a TV in a room 20 feet away, let alone when it is up close and personal in a small, dark theatre and 50 other people are between you and the door. It was just as well between the blood, screams and chopping of body parts, a sprinkling of comedic farce, wit and wordplay provided some light relief.

Terror 2007 is an homage to the Theatre du Grand-Guignol. The night comprises five one act plays, including a hitherto unpublished work by Noel Coward, alongside work by writers exploring the horror genre. The thread of assumed/actual insanity, was a common theme in Guignol Theatre during the period when it was turned into a "house of horror", and this same thread runs through the plays in this production.

Coward's impertinent and witty play The Better Half, is set amongst the aristocratic elite of the 1920's. The author explores the dilemma when a husband, his wife and her best friend become embroiled in a love triangle that leads to the disintegration of a marriage . David, played by Will Barton, is a noble man who attempts to maintain his dignity and his marriage vows. He is despised by his wife Alice, played by Federay Holmes, much to the displeasure of her friend Marion, played by Nikki Leigh Scott. Holmes' excellent portrayal of Alice, is taut and sardonic enough to metaphorically draw blood from both the lackless David and the even more prim Marion.

Kiss of Death is a new translation by Tristan Langlois of a Guignol play – Goodnight Kiss. A man is haunted by the ghost of his wife who, it transpires, committed suicide in the not too distant past. He deals with these encounters in a most unconventional way. This play was originally written by Francis Neilson and Jean Aragny and provided the audience with plenty of hand-over-eyes moments. One audience member repeatedly asked "What's happening? I can't look."

Ripper is set in Buckingham Palace and explores the connection between the monarchy and Whitechapel prostitute murders. Written by Mark Ravenhill, this piece was sandwiched in the middle of the night's performances and was perhaps the most unsuccessful piece of the night. Whilst the thread of insanity is maintained, you may find the leap required to suspend reality a little too great.

We are treated to a more contemporary theme in Guns Or Butter by Lucy Kirkwood. It offers a critique on the conditions faced by British soldiers in current conflicts in the Gulf and Afghanistan, as reported in the media. Guns or Butter is disturbingly dark. As low morale and a series of seemingly coincidental events lead to a shocking conclusion, you may find yourself persuaded to join the clamour to bring the troops home.

Finally, the Marquis de Sade is the subject of Darren Ormandy's Sweetmeat. Set in his prison cell, this piece is perhaps the most terrifying of them all. Sweetmeat delivers a knock out twist and asks deep questions of its audience. Oliver Seaton plays de Sade in an uncompromising way. His portrayal of this character leaves an uncomfortable chill down your spine.

The Union Theatre provides the perfect backdrop for Terror 2007. It has the faint aroma of old London. It sits under the railway arches, in an often forgotten part of the city, even the trains that go over from time to time add to the suspense filled atmosphere. The sets in this production are not overly lavish or complex, nor do they need to be. In conjunction with the lighting, they provide enough propellant for the audience to fill in the detail.

The season is suitable for adults only. In true Grand-Guignol style, the mix of comedy and horror is a great way to spend a night as Halloween approaches. The three stand-out plays amongst the collection, The Better Half, Guns or Butter and Sweetmeat make Terror 2007 a definite addition to the diary for fans of the macabre.