Mayor of London Ken Livingstone has published the final version of his planning blueprint for Waterloo as a place to live, work and visit. 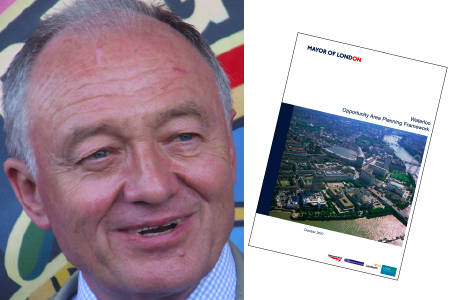 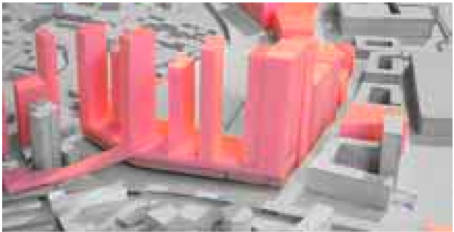 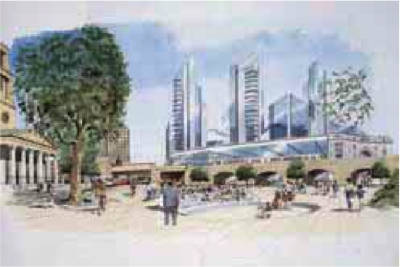 Concept sketch of city square seen from the north

The new Waterloo Opportunity Area Planning Framework follows the draft Waterloo Development Framework published in February 2006 and will serve as a blueprint for development in the area over the coming years.

Proposals include reworking the IMAX roundabout to create a new city square and the removal of private cars from Waterloo Road to give priority to pedestrians, buses and the Cross River Tram.

The Mayor is also encouraging the development of new "world-class" tall buildings around and above the station and along the "commercial spine" behind the riverside.

"It is also the gateway to the South Bank, one of the world's leading cultural centres, which has recently been subject to a multi-million pound makeover to ensure it retains its unique status as one of London's most popular attractions.

"It is vital that we improve the attractiveness of the station and its surroundings, making the most of the whole neighbourhood and stitching all of its individual parts together.

"We can only achieve this through careful planning over the next generation. If we can do this, the prize will be thousands of new homes and jobs for Waterloo and great improvements to its layout and public space, making it more attractive, vibrant and easier to get around."

The area covered by the framework includes Waterloo Station and the South Bank from St Thomas' Hospital to Gabriel's Wharf. This is identified as an 'opportunity area' for new homes and jobs in the Mayor's London Plan.

Network Rail – which is due to bring forward its own proposals for a major rebuild of Waterloo Station – has welcomed the Mayor's document: "Its vision and objectives for Waterloo are closely connected with our strategy for Waterloo Station and its immediate surrounding area," says Robin Gisby.

"Network Rail will shortly be commissioning consultants to further develop options for the Station – this can now take place in the context of the adopted framework. Network Rail looks forward to continued joint working with stakeholders as plans move forward."

Cllr Paul McGlone, Lambeth Council's cabinet member for regeneration, said: "It represents the beginning of an exciting new era for the future development and regeneration of this part of the borough, and the wealth it generates will beneift the entire Lambeth area and local communities. The planned new jobs and homes together with public realm improvements will cement Waterloo's place firmly as an integral part of inner-London's economy."

The 144-page Waterloo Opportunity Area Development Framework can be downloaded from the Mayor's website.

The framework is summarised in the following 'vision': "To give Waterloo a new 'City Square' to create a radically improved public space, to improve permeability to and within the area and provide new development principally in the area around and above Waterloo Station."

How the vision will be achieved

The document sets eight objectives to achieve the vision:

• A new 'City Square' and interchange space for Waterloo to create a vastly improved public space around the station.
• Remove general traffic from Waterloo Road and give priority to pedestrians, cyclists and public transport.
• Redevelop and redefine Waterloo Station so that it becomes for a new centre for the area.
• Use the public realm to bring the different parts of Waterloo together and address pedestrian movement/connections.
• Support the world class cultural quarter at the Riverside and use it as a motor for regeneration.
• Maximise development potential.
• Allow for incremental change.
• Preserve and enhance the key features of each of Waterloo's character areas.