Amidst the stalls and shops of Borough Market children from London primary schools celebrated the harvest festival in a special way. 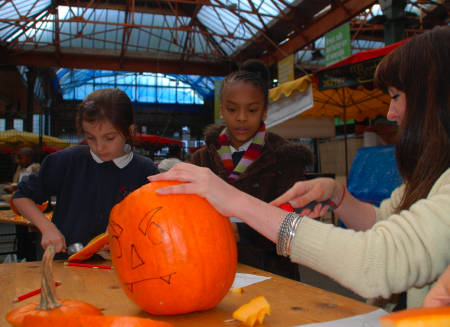 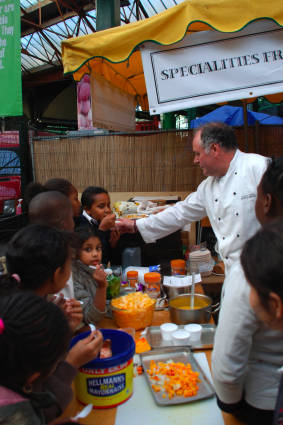 The highlight of the afternoon was the opportunity to learn how to carve pumpkins. Remains of the pumpkins lay strewn about the wooden tables, making for a festive atmosphere.

A forrester who has visited over 50 London schools shared his knowledge and expertise in pumpkin carving with the children. Each child was given a piece of paper on which to draw their design for the pumpkins. Then the forrester, along with several teachers and helpers, would carve the designs into the pumpkins. Some of the pumpkins were grown on the school grounds as part of a year-long project.

Smiles and laughter mingled in the air even as the children carefully directed the pumpkin carvings, telling the helpers exactly how they wanted their pumpkins to look. Helpers would instruct the children on the art of pumpkin carving, showing them how to carve out eye slits and make zig-zag smiles.

The inquisitive school children were eager to learn and express their own excitement about the upcoming holiday. "We get to carve pumpkins because of the harvest," said one boy. Other groups of girls were excited about dressing up and showing off their newly carved pumkins around their neighbourhood.

Along with the woodsman and helpers, a chef joined the fun, providing themed pumpkin cuisine. "It's a great way to get involved," he said. The chef had roasted pumpkin seeds, hot spiced pumpkin soup, and scrumptuous bits of pumpkin pie. The kids could take breaks from pumpkin carving and learn about how to make each of these food items.

Designed to give the children a unique cultural experience with pumpkin carving, the day's activities also made for a fun celebration of the harvest festival. With the end result of the carved pumpkins on display on a tall wooden table, the children enjoyed viewing each other's creations. The day's events created an experience these school children will not soon forget.