On display now at the Cuming Museum in the old Town Hall on Walworth Road is an exhibition featuring famous works by William Hogarth. 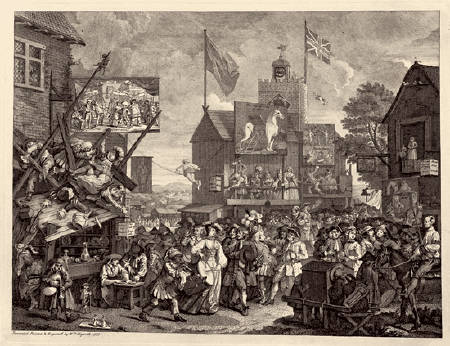 The museum, which houses the collections of Richard and Henry Cuming, is showing Hogarth engravings under the title Silk, Squalor & Scandal.

Hogarth gives a uniquely blunt appraisal of British society during the 18th century by using themed engravings. Of particular interest is the work "Southwark Fair" which provides a humorous depiction of this once annual local event.

The fair took place on 8 September, Our Lady's Birthday, outside St George the Martyr whose tower is seen in the picture. Indeed this is probably the last depiction of the old battlemented tower before the church was demolished to make way for today's familiar Borough High Street landmark.

With over twenty of Hogarth's engravings on display, viewers get a sense of the scandalous nature of Hogarth's time. The four collections, Rake's Progress, Gin Lane, Harlot's Progress, and Marriage a la Mode each tell a stirring story of the characters and events that Hogarth knew so well.

This free exhibition should be visited by those who missed Southwark Fair being shown earlier this year at Tate Britain.