Was He Anyone? at the Union Theatre

Hidden away beneath a railway bridge something absurd is occurring. The world of N F Simpson follows only the logic of its own surrealism and yet manages to point directly at the flaws of our own mad world. 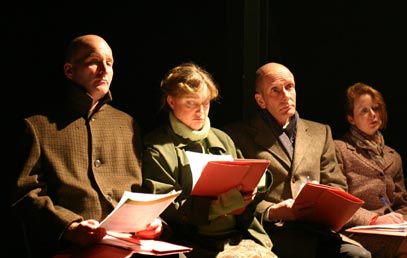 Was He Anyone? looks at the events surrounding the mishaps of a man stranded in the Mediterranean during 'National Help You Out Year Week'. His wife (Nicola Sanderson) desperately tries to convince committees and charitable organisations to help but consistently meets a barrage of bureaucracy. As this happens, the press takes on the story and the propaganda around the event becomes more important than the event itself. Sanderson plays perfectly the buttoned-up wife, with endless faith in her hapless husband. One can see her character's progression as the media frenzy and the press perks take hold.

The cast is large for a fringe piece and the multiplicity of their roles adds to the absurd, dreamlike tone of this play. The ability of the entire cast to change not only costume but voice and physicality with ease and skill is impressive. The vocal range of Joshua Hemmings is particularly notable. As the cast member with least characters to play, Sanderson provides an anchor for the absurd mixed logic of this piece and an anchor in modern society.

Much of the comedy of this piece lies in the sinister nature of the characters. Members of a cruise ship sailing past a drowning man discuss the pros and cons of different types of appealing voice rather than helping him from the water. Jan Goodman pitches the character of a waspish Times-reader particularly well, always aware of giving to charitable organisations but never lowering herself to help first hand.

The piece lacks pace in the latter stages in order to make the comedy and absurdity work. Lines tend to drag a little but the poignant closing moments make up for this.

The design (Rosemary Flegg) is innovative and makes clever use of the limited resources of fringe theatre. Unfolding and rotating set pieces portray new locations by giving just what is needed rather than over-providing for the imagination. The lighting (Richard Howel) evokes old movie glamour, especially on the cruise ship setting and creates another false-smile dimension to the absurd world at which we are looking. The sound (Adrienne Quartly) adds to the pace and location but could be used more frequently to give momentum later in the play.

The laughs are felt with a slight edge of guilt as the audience recognises the truth of the world in front of them. On reflection, there is more reality than surrealism in this piece. How ironic that it takes a piece of absurdity to hold a mirror up to our own society with such accuracy.