The Union of Shorts: The Best of the Bunch! at the Union Theatre

"I'm not good at telling stories," Rich (Fraser McPhie) tells us in Horst Buchholz and Other Stories, the first of the plays of the Union of Shorts -The Best of the Bunch! comedy evening at the Union Theatre. 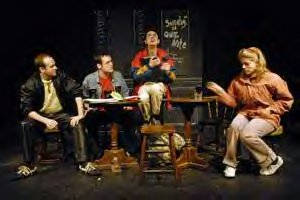 Don't you believe him, this was a thoroughly pleasant evening of good solid storytelling, celebrating a decade of the existence of the theatre.

Four of the five plays billed were presented on the night I went, and their order of presentation made a deliciously neat little feast; two plays with a somewhat darker side to them sandwiched in between two rather more light-hearted pieces, each giving us plenty of occasion to chuckle, and at least a little food for thought.

These were grounded pieces of comedy theatre, not flights of bawdy fantasy. We were certainly teased into laughter, but at times we were also provided with interesting reflective moments.

This was especially true for me in The Gatekeeper's True Religion by Mike Pearcy. The relationship between a priest sent to Chernobyl and a gatekeeper working there, was beautifully balanced and the characters adeptly portrayed by Dominik Kracmar and John Gillespie respectively. The wonderfully ironic script, while making us laugh at the ridiculously inept man of the cloth, also perhaps hinted at a deeper and darker question about the notion of hypocrisy as it can sometimes be practiced in the ministries of the church.

38-26-38, written by Michael Holland, formed the other part of the darker 'filling' to the 'sandwich'. The fine performances here by Andrew Obenay playing Jimmy, and Danny Brown playing Tommy, took us for a brief but very funny moment into the psyches of middle-aged, single and lonely men and the lengths they will rather pathetically go to in their quest for female company. Olga (India Fisher) was enormously entertaining in the second act, and provided the loud, brash female consequence that Jimmy's ill-considered lying probably deserved.

The opening and concluding plays, Horst Buchholz and Other Stories, by Matthew Wilkie and Indigenous People by Andrew Biss, provided the 'bread' to the sandwich. The former was the least entertaining of the evening for me, it seemed to try too hard, and its themes were a little obvious and worn out. However the play did have an interesting theatrical form to it, moving out of the pub setting at times to flesh out the lives of the individuals making up the miserable quiz team. Stephen Glover as the pitiable George and Jonathan Peck as a more complex Tim delivered very credible performances.

Jonathan Peck also played Roger in Indigenous People, more of a caricature piece, and the dialogue between him and Caroline (Gillian Mccafferty) was amusingly clever and eruditely absurd. Their obvious out-of-placeness in a campsite in the Lake District was the perfect background for the comical events that transpired during their date.

The set accommodated all four plays extremely well, and allowed for scene changes to be done cleverly, making the transitions between each seamless.

Like all good storytelling, the evening's entertainment felt as if we had been invited in by friends to the most convivial of places; a funky, warm, welcoming theatre with drinks and a fire, just the thing for a winter's evening out.

Caroline's last lines 'I'm glad I'm here, and I'm glad I'm with you' quite summed up my own feelings about the evening.

As an aside, if you are interested in the location of this intriguing little theatre, it is worth taking a look at the collage of photographs on the wall above the piano which document its construction.