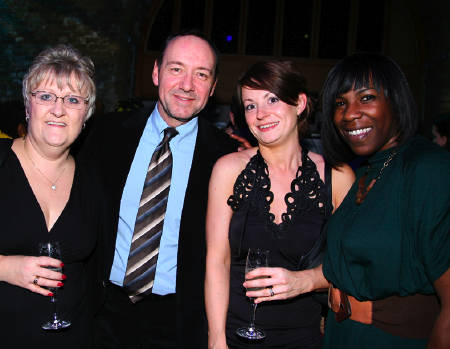 Kevin Spacey with members of the customer service team who help pensioners in the borough.

Spacey, the artistic director of The Old Vic in Waterloo, and Douglas Camp, who lives in the borough, were the guests of honour at the event which was held at Vinopolis in Bankside.

Southwark Council's Star Awards recognise the effort of individuals and teams who have helped to improve services for the people of Southwark in the previous 12 months.

"I was really pleased to be able to meet the staff of Southwark Council whose hard work makes such a big difference to the residents of the borough," says Kevin Spacey. "It was a valuable and important event in our community and I was delighted to be there."

Sokari Douglas Camp added: "It was an absolute pleasure to be able to talk to Southwark Council staff about some of my art tonight. It was a great opportunity to recognise all of the brilliant work officers do and to give a little something back to the community."

The council says that Spacey and Douglas Camp were not paid for their appearance at the event.

• Kevin Spacey and his work at The Old Vic will be the subject of an edition of The South Bank Show with Melvyn Bragg to be broadcast on ITV1 on 6 January 2008.